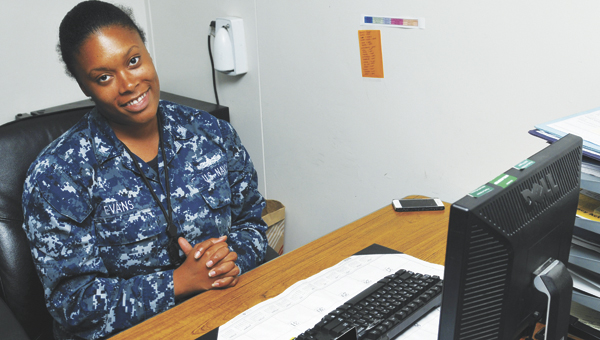 Some jobs in the military are exciting, but others involve just as much pushing paper as their counterparts in the private sector.

It’s something Petty Officer 3rd Class Erica Evans knows all too well. As a yeoman currently stationed on board the aircraft carrier USS Abraham Lincoln, she said, her job is “sort of like human resources.”

That might sound boring to most other people, but being a self-described people person, Evans found the perfect job.

“I love people, so customer service is for me,” said the Suffolk native, who graduated from Nansemond River High School in 2008 and whose family still lives here.

Evans said she joined the U.S. Navy four years ago, because after one year of college, she already saw her debt rising because of student loans.

“I wanted to go in to further my education,” she said. “I knew they would pay for school.”

She first was stationed in the United Kingdom at the Joint Analytic Center there. She performed the same job there that she currently does in the Lincoln, where she arrived a year ago.

The ship currently is stationed at Newport News Shipbuilding, so she is enjoying the opportunity to be near family and friends.

“I like to go shopping and traveling and spending time with my family,” she said.

On board the ship, she enjoys the opportunity to meet new people.

“I’m constantly meeting new people every day and making sure their careers are going the way they’d like them to go,” Evans said. “I have to do the captain’s and the executive officer’s paperwork and make sure it’s up to standards for them.”

The people can be the most challenging part of the job, though.

“Everyone has different opinions, and sometimes you don’t agree with how they want to go about things,” Evans said. “Sometimes, it’s hard to compromise. You have people from all different backgrounds, and you have to get accustomed to the way everyone was brought up.”