National Night Out is almost here, and communities in Suffolk are gearing up for another installment in the annual partnership against crime.

More than 30 Suffolk communities will participate in the event, held nationally on the first Tuesday in August. Sponsored by the National Association of Town Watch, it encourages folks to get outside, get to know their neighbors and law enforcement officers and present a united front against crime. Many neighborhoods host children’s activities, entertainment, food and similar activities. 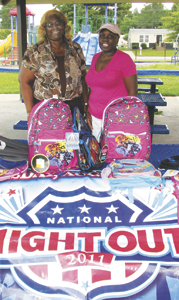 Beulah Hall and Arleathia Crocker, publicist and secretary, respectively, of the Lake Kennedy Civic League, show off some of the bookbags the civic league will give away to children in attendance at the community’s National Night Out celebration on Aug. 5.

A handful of Suffolk neighborhoods are getting together for the first time to host a combined event.

The Saratoga-Philadelphia Civic League plans to host a big combined party at Peanut Park. It has invited the Hall Place and South Suffolk-Pleasant Hill neighborhoods.

“We thought it would be a good idea to bring the downtown communities together,” said Anton Weaver, vice president of the Saratoga-Philadelphia Civic League. “We normally host about 650 people combined, but we’re expecting about a thousand people coming to this event.”

Weaver said the event will include a gaming bus, bounce house, dunk tank and competitive sports. Youth sports teams that have won championships are slated to be recognized. Live musical entertainers will also be featured.

Community resources also will be highlighted, Weaver said. Healthy People Healthy Suffolk will be on hand to talk about healthy living. The Morgan Memorial Library will register people for library cards, and the Suffolk Literacy Council also will be on site. A health care agency will demonstrate CPR, Weaver said.

Over in the Lake Kennedy neighborhood, the civic league has increased the number of free bookbags it plans to offer to local youth. It gave out 30 last year and has bumped that up to 50 this year. The first 50 youth in line will receive the backpacks, with the rest of the children in attendance receiving gift bags with school supplies.

“We’re excited about it,” said Arleathia Crocker, the civic league’s recording secretary. “We want the whole neighborhood to come out.”

Plenty of food will be on hand for the event, as well as a DJ, a clown and steppers. It runs from 6 to 8 p.m.

For more information, or to find the party nearest you, visit www.suffolknno.org.