Edens grows near where he was planted

It has been an exciting summer for Taylor Edens with the Peninsula Pilots in the elite Coastal Plain League, one full of big adjustments that have been nicely paired with hometown support and the chance to sleep in his own bed at night in Suffolk. 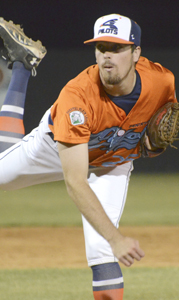 Former Nansemond-Suffolk Academy star Taylor Edens has experienced some significant changes on the mound this summer with the Peninsula Pilots, both in terms of his role on the team and his throwing motion.

The former Nansemond-Suffolk Academy baseball star is fresh off of two successful years as a relief pitcher at Virginia Military Institute but has been facing a new breed of competition this summer.

The Coastal Plain League features teams populated by Major League Baseball draftees and many college baseball teams’ best players, some of whom played in the NCAA Tournament.

“The quality of play is good, so I feel pretty good with how I’ve done,” Edens said.

Carrying a similar perspective was his former coach at Nansemond-Suffolk Academy, David Mitchell, also an assistant coach for the league-best Pilots.

“Taylor’s done very well for us,” Mitchell said. “He’s gone through quite a bit of a transition. Up at VMI, he was primarily a back end of the bullpen type guy, which means he came in and was either a setup guy or a closer.”

He initially filled a role like that for the Pilots, but in the last few weeks that has changed.

“We feel that Taylor’s got a chance to be a starter at VMI,” Mitchell said, and the Pilots coaching staff has given Edens four starts.

The reliever-to-starter transition has meant he has gone from throwing 15-20 pitches per game to 60-70.

“It’s quite a bit of a difference on your body and on your arm, but he’s done well,” Mitchell said.

“He’s done a great job being coachable and listening to our pitching coach,” Mitchell said. “Taylor’s moved from a three-quarter arm slot to a more back-to-front, pitching over top.”

Praising the Pilots coaches, Edens said among his big goals this summer were “to get stronger and more mechanically sound, and I think they’ve done an excellent job with both of those.”

Being given a contract to play for the Pilots has been a thrill for Edens for other reasons, too.

“It’s pretty cool to be able to play for a team that I’ve been watching since I was 7 or 8 years old,” he said.

He has also enjoyed the hometown support found amidst the usual crowds of 2,500 to 3,000 each night.

One game, he said, “I looked up and saw a guy that coached me when I was 9 years old.”

Many NSA supporters have come, and he said he frequently gets asked when he will start next.

It will be Monday, 7:05 p.m. at War Memorial Stadium in Hampton.