A Chuckatuck native is learning the ropes in the Virginia State Police after joining the force and being assigned to the Prince George County area.

Trooper Nathan-Michael Smith, 26, said he has always wanted to be in law enforcement. 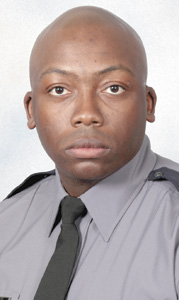 “As a kid, I would memorize license plates and identify cars,” he said. “I’ve always been interested in helping and serving the public in any way that I can.”

The 2005 Nansemond River High School alumnus, who is married with two children, said he decided to join the state police because it is a prestigious organization.

“If you’re going to be in law enforcement, why not do it for the state, because that’s the best agency you can be with,” Smith said.

Serving mainly to patrol interstates 95 and 295 and Route 460, Smith said the most challenging part of the job is the unexpected.

“You don’t know if it’s going to be as little as a disabled vehicle all the way up to a tractor-trailer overturning, which causes a (hazardous materials) situation,” Smith said. “It’s one extreme to the next extreme.”

Part of the roads he works are also on his route to check in for duty. Recently, he worked a tractor-trailer accident after having passed by the very spot where it occurred about 10 minutes prior to the crash.

“It’s the unexpected every day,” he said.

He said Prince George was not his first pick as an area to work, but because he spent his probationary period in Henrico County and it also includes the interstates he currently patrols, it has not been a difficult adjustment.