James Gallagher of Yorktown was the overall champion on Sunday with a clutch putt on No. 18 that concluded what was a landmark event for Sleepy Hole Golf Course — the 2014 Chick-fil-A Sleepy Hole Amateur Championship.

This was the first year the long-running Sleepy Hole Amateur has had a title sponsor. 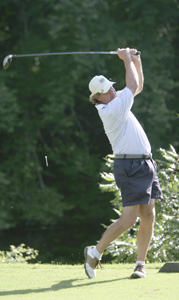 James Gallagher of Yorktown tees off on No. 17 at Sleepy Hole Golf Course on Sunday during the 2014 Chick-fil-A Sleepy Hole Amateur Championship. Shortly thereafter, he became a two-time winner of the event.

“Obviously, having Chick-fil-A on board, everything was really good,” said J.T. Belcher, Sleepy Hole director of golf operations. “That boosted us up a little bit, I felt like.”

He said the biggest field the two-day event had previously yielded was 116, a record shattered this past weekend as 146 golfers participated.

“We’re pumped up about that,” Belcher said. “It’s very hard this day and time, with the way golf is. Golf’s kind of declining a little bit.”

Difficulties in getting good fields of golfers stem from reasons including there being a plethora of tournaments at this point in the summer and a resistance to non-team events, he said.

Andrew Riddick is marketing director for Chick-fil-A’s store on Portsmouth Boulevard in Chesapeake and a longtime friend of J.T. Belcher’s. He was happy for the opportunity for brand-building and for raising the profile of the tournament.

What also helped draw the field of golfers that included residents from Maryland, North Carolina and all over Virginia was the Sleepy Hole Amateur’s status as being an event in which participants can earn points for the Virginia State Golf Association state rankings.

Gallagher, now a two-time winner of the Sleepy Hole Amateur, said he made this his ninth year participating in the event for reasons including its history and its location, which features the Obici House, as well as what he said is “one of the best municipal golf courses around, and I think it deserves our support.”

“J.T. and Katie (Murphy), I have the utmost respect for them as professionals and people that run a course,” he continued. “And then, annually, this event is one of the two or three local events that gets the good players out. It’s a really good field, and so if you play well here and you play strong, this is a significant win for me. I look at the leaderboard, it’s all the good players here, and so that’s a big deal.”

He shot a four-under-par 68 on Saturday and followed it up with a one-over-par 73 on Sunday, beating Mike Askew by a single stroke.

Gallagher leaves on Friday for England where he will play in the British Senior Amateur Championship. He said fighting through ball-striking struggles on Sunday for a narrow victory was good preparation.

“I knew where I stood all the way around because I was playing with Mike, and to be able to grind out a win, that makes me feel confident that if I have a bad day over there, I’ll be able to grind something out there, too,” he said.

Following are the top 10 finishers with gross scores for each flight in the 2014 Chick-fil-A Sleepy Hole Amateur Championship held on Saturday and Sunday at Sleepy Hole Golf Course: