Warriors prepare for the gridiron

The Nansemond River Warriors took part earlier this month in the Bobby Wilder Old Dominion University Football Team Camp as they gear up for the upcoming 2014 season under new head coach David Coccoli.

Formerly the head coach of a Forest Park team that made the state quarterfinals in 2013, Coccoli saw an invaluable opportunity for instruction before practice officially starts in August. 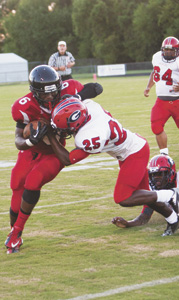 Nansemond River High School’s DeShon Saunders will be a threat to run and to throw as the Warriors’ primary option at quarterback this year.

“For us, it’s a great experience,” he said. “Up front on the offensive line, we’re starting four juniors, and two haven’t played football in a year. Starting only five seniors total, we’re clearly a young football team that’s going to need all the experience we can get. But we have potential as long as these kids keep working.”

There are several new faces for the Warriors and some key members to replace from last season, such as running back Latrell “Vegas” Sandifer and linebacker Marvin Branch, both of whom moved on to ODU as preferred walk-ons.

In addition to breaking in a bunch of new starters, they have a new system to get adjusted to before their Sept. 5 opener at Grassfield.

“It’s a lot different from what they’ve done in the past,” Coccoli added. “We’ll be multiple on both sides of the ball, offense and defense. We want to be aggressive, and we’re going to do some of the same things I did the last couple years in Northern Virginia.”

Engineering the offense from the quarterback position will be senior DeShon Saunders, who saw ample playing time last season and is a threat on the run. Part of the backfield rotation last year, rising junior Terrence Lambert is going to be a critical part to their running attack.

Rising senior Keion Roberts gives them a tall wideout to turn to in the passing game. He’s the younger brother of former Smithfield standout and Virginia Tech’s Dyrell Roberts. On the offensive line, junior left tackle Thomas Hopple is drawing attention from schools at the next level with his size and blocking ability. Guard Leonard Floyd is slated to be lone senior starter on the offensive line.

Along the defensive line, senior Fred Dupree and sophomore Dia Gray, an All-State wrestler as a freshman, are projected starters. Juniors Demetrius Stitmon and Larry Goodman at inside linebacker have shown considerable promise, enough to where they appear to be the backbone of the defense.

“Colleges are starting to take notice, because he’s got the size and the speed,” Coccoli said of Stitmon.

Competition clearly exists in the secondary. Josh Covington, a rising junior who also plays basketball, is expected to see significant action at safety, along with another rising junior, Marquis “MD” Braimer. Incoming freshman JeVon Wallace has a chance to start right away at corner and could be a prospect down the road.

“Any time you’re 14 years old and playing varsity, it’s going to be an interesting experience. He’s definitely in the mix.”

Coccoli is optimistic about what the future holds for the Warriors and has already seen progress.

“I think we’ve got some playmakers,” he said. “We have a tough schedule ahead of us, so we’re going to have to be fundamentally sound, play good defense and special teams. We’re big and strong in some spots, and I like that we got better from the start of the camp to the end.”