A 38-year-old Suffolk woman is being sought by police on charges of embezzlement and uttering false bank notes. 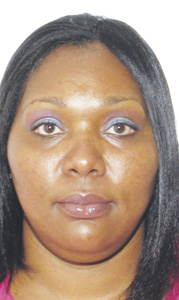 Police say Chiquita Monique Adams took U.S. currency on May 9 from the Bojangle’s restaurant on Bridge Road, where she worked at the time, and replaced it with counterfeit bills. Restaurant management caught the counterfeit bills and contacted police, according to a city news release.

None of the counterfeit bills were passed to customers, according to the release.