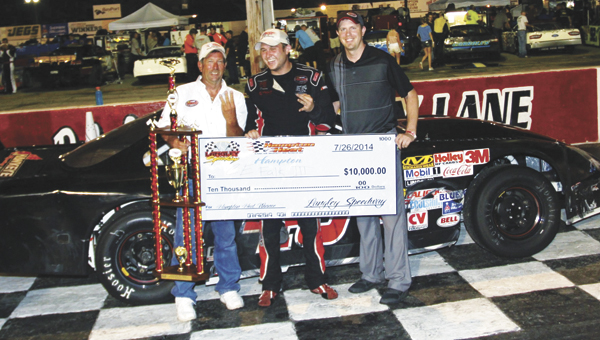 Matt Waltz started on the pole, at 88.482 mph, and paced the first 98 circuits. Langley newcomer Deac McCaskill shared the front row with Waltz and ran second until giving way to Nick Smith on Lap 41. Meanwhile, Falk, who started 13th on the 37-car grid, was steadily working toward the front. He cracked the top five on Lap 73.

On a restart at Lap 99, Smith eked out a slight edge over Waltz to move atop the leaderboard. Three laps later, the caution flag waved for the 15-minute halfway (give or take) break.

Returning to the track, Waltz and Smith found themselves deployed in 24th and 25th places, respectively. Back under green, to begin Lap 107, Falk stalked Edwards for five circuits, then launched a successful bid for the top spot, slipping past Edwards in Turns 1 and 2 on Lap 112.

The remainder of the event was punctuated by six caution flags, bringing the race total to 10. Among the drivers snared in the carnage were Waltz and Smith. They ended up 26th and 30th, respectively, in the final rundown.

On each restart, Falk had to contend with Dillon Bassett, currently top-ranked in NASCAR’s North Carolina state standings. Nearing the finish, the face-offs between Falk and Bassett grew more and more physical, but Falk held onto the lead.

The final yellow flag flew on Lap 195 and pushed the race into overtime. On the last restart, to begin Lap 204, Falk cleared Bassett in Turn 2 and left the door open for Danny Edwards Jr., who moved up to challenge for second.

At the finish, on Lap 205, Falk was the winner by 0.411-second — about two car-lengths — over Edwards Jr. Greg Edwards was third, while Peyton Sellers and Matt Bowling, both former Hampton Heat 200 winners, rounded out the top five.

After contending for the win, Bassett skated sideways through Turns 3 and 4 on the last lap and dropped to seventh.