Harris back in uniform 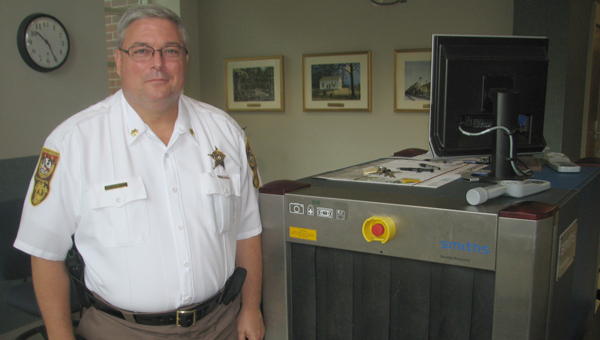 New uniform: Maj. Everett “E.C.” Harris demonstrates the security equipment at the entrance to the Mills C. Godwin Courthouse. In his new position, he is in charge of courthouse security and other aspects of the operation of the sheriff’s office.

Throughout a long career, Maj. Everett “E.C.” Harris has held more law enforcement jobs than many smaller police departments even have available at one time.

Harris recently came out of semi-retirement to work full-time for the Suffolk Sheriff’s Office. As the chief deputy, he’s responsible for assisting Sheriff Raleigh Isaacs Sr. in overseeing the entire department.

But it’s not his first run-in with the law. After working on the water in his youth, like many others from his native Eastern Shore, he turned to the military when an oyster disease called dermo decimated the oyster populations in the 1980s.

“It killed all the oysters, and on the Eastern Shore there wasn’t many jobs, so I enlisted,” Harris said.

He did a three-year tour as a military policeman and then returned home for a stint as a member of the Chesapeake Bay Bridge-Tunnel Police.

He joined the Suffolk Police Department in 1987 and eventually left to work as an investigator for the Commonwealth’s Attorney’s office.

He retired from that position in 2012 but then came back to the job on a part-time basis. Recently, though, he decided on a change of scenery.

The 52-year-old put on the brown-and-white uniform of the sheriff’s department on July 16. He said it’s been a challenge learning a lot of new things so far, but the deputies have made it an easy job.

“I’ve got an outstanding staff,” he said. “All these guys got so much experience, they know what they’re supposed to do.”

He especially recognized Deputy James Darden, who is in charge of courthouse security. The other main duty of the sheriff’s office is serving civil papers, which Harris also oversees.

“I’m kind of responsible for everything,” Harris said.

Harris said he believes in community service, even while he’s at work.

“What we’re here to do is serve the public,” he said. “We’ve got to be mindful of that.”

Even when he’s not at work, Harris can usually be found doing activities with the Masonic lodge and Suffolk Ruritan Club.

“I’m a big believer in doing something to help somebody,” he said. “Sometimes, it’s just a little thing to make their day better.”

Beware dangers for kids in cars