Lakeland High School boys’ varsity basketball coach Clint Wright knows his Cavalier Basketball Skill Camp will never balloon to 50 or 60 youths. But the second year of the event this past week included some perfect illustrations of what Wright is trying to achieve with it.

“It’s my goal to teach the game of basketball,” he said, but not by employing scrimmages, which typically draw a crowd of campers. 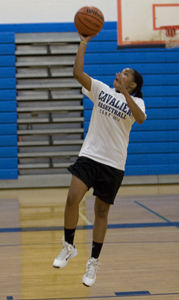 Abilities honed: Windsor’s Bridgette Walton, 17, performs an exercise at the conclusion of the Cavalier Basketball Skill Camp on Thursday at Lakeland High School.

Instead he used drills as his teaching tools all four days, Monday through Thursday, having expanded the camp a day from last year. Wright had 22 youths this year who wanted to learn.

“The hunger is one of the things that I liked the most,” he said.

Thirteen-year-old Theodore Wheeler of Suffolk gave his impression of the camp.

“It helps you learn the fundamental skills and all the basic fundamentals of basketball,” he said. “It’s nothing fancy, just the way you’re supposed to play basketball, and I like it, because Coach Clint and his staff make good coaches.”

Campers ranged from third- to 11th-graders. Wright said the youngest participant, Nileigha Williams, was “a prime example of what the skills camp was all about.”

She showed up on Monday in tears, not looking forward to the proceedings and not skilled in the game of basketball.

“We attempted to comfort her, but yet she was still overwhelmed,” Wright said.

Eventually she settled down and started to learn. Initially she could not get the ball to the rim, but then she learned the proper way to shoot.

On day two, “She was all smiles,” Wright said, and she showed that she had grasped what he and his fellow instructors were teaching.

On day three, “She was first up to score, and she scored immediately,” he said. “Third and the fourth day, it was almost easy money, for sure.”

And she was not alone among the satisfied campers.

Bridgette Walton, 17, of Windsor, said the camp was “fun and helpful at the same time,” highlighting the drills that taught proper footwork, rebounding and shooting as her favorite.

Fourteen-year-old Tisha Copeland of Franklin said, “I feel like I learned a lot, and everything we learned, I’m ready to take into the season and win some games.”

Seventeen-year-old Carlyn Stowe of Windsor said, “I wasn’t as good at offense, but I’m a lot better now,” she said.

Wright also had a 9-year-old camper from Maryland, Orlando Gardner Jr. His father, Orlando Sr. brought his son to the camp after being referred to it by his uncle, Mike Gardner, boys’ varsity coach of Heritage High School, a Lakeland rival.

Gardner Sr. said during the course of the week, he saw fundamentals being refreshed and redeemed for his son.

It was exactly what Wright was going for.