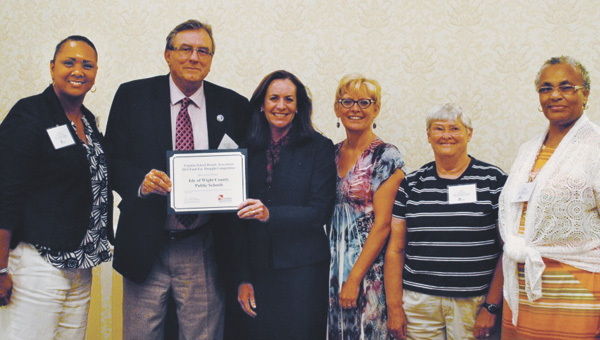 The Isle of Wight County School Division on Tuesday became one of only three public school systems in Virginia to win in the Food for Thought Competition.

IWCS won in the category of Meal Access to Fight Hunger, and the presentation was made by Virginia First Lady Dorothy McAuliffe at the Virginia School Board Association Conference on Education in Richmond. The other categories were Healthy School Meals and Wellness and Physical Activity. The entry was judged by a person involved in food banks, a former school board member and two nutritionists.

The contest, which began in 2012, is intended to get school leaders to act on the issue of childhood hunger and offer all students “healthier and more nutritious school meals.”

“We got involved two years ago when we were invited to bring a food item to share for the Food For Thought competition that the VSBA had started. We brought with us a Black Bean Brownie that was so popular with the VSBA president that we received an invitation to meet Sam Kass, the White House chef.”

Taylor said the food services department entered again last year and won first place in its division “for the work we do providing healthier meals for our students — with salads, fresh fruits and vegetables and purchasing locally grown produce.”

For this year, Taylor presented the work that she and her team did to increase access for students. She had written several grant requests to buy equipment for the Breakfast in the Classroom project. Nine classes at Windsor Elementary volunteered to have breakfast in their classrooms.

“The teachers that participated told us they would not go back to eating in the cafeteria if they could continue eating in their classrooms,” Taylor said. “They loved the program. The students come in and pick up their breakfast and eat in an atmosphere that is un-rushed and pleasant. No one is standing over them telling them to hurry up so they can get to class.”

A Kid’s Cafe was then established at Hardy Elementary. The students chose their morning meals and ate in a classroom before heading to their homerooms. At Carrollton, students pressed for time can pick up a meal served in paper bags.

“This also allows students to eat without having to rush,” she said. “We have found [that] if the students are given time to eat they will. If they have someone standing over them telling them to hurry they will not eat. Half or more of their breakfast will go into the trash.”

The recent recognition has proven as satisfying to Taylor as the breakfasts are for students and teachers alike.

“I believe we have an outstanding group of people that care for children and want to feed them the best possible food,” Taylor stated. “We get bragging rights for the next year!”