Keith Urban coming back up from Down Under

Keith Urban will be at Farm Bureau Live in Virginia Beach on Saturday. The concert starts at 7 p.m. Opening acts are Jerrod Niemann and Brett Eldredge. Ticket prices range from $29.25 to $88.

For tickets call 368-3000. For further information go to livenation.com. 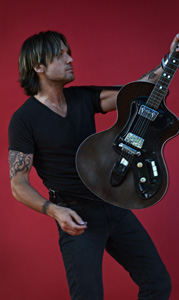 By way of introduction, this new section of the News-Herald will feature comparatively short previews of — among other things — some of the big-name country music attractions coming to Hampton Roads, filling a void caused by other publications virtually ignoring the genre.

Essentially, I have been doing such articles for about half a century. We recognize, of course, the fact that many members of these audiences come from our neck of the woods.

Due to physical problems — bone problems — and age (85), I am no longer able to join the happy crowds at these concerts. But, previews — I can still handle them.

The last series of concerts I reviewed took place in 2012 and, that year, one of the presentations featured Keith Urban. I deemed it the best concert of that season.

He is a fine singer and instrumentalist (he plays acoustic and electric guitar, bass guitar, banjo, mandolin, piano, drums and the sitar and bouzouki). His energy is boundless. He never lets up and, except for a ballad or two, he never slows down.

Urban is known as an Aussie country star. He was born in New Zealand, and his family moved to Australia when he was two). He charted four singles in the Land Down Under, then moved to the U. S. and became an immediate star, debuting with a self-titled album.

His first hit singles were “But For the Grace of God,” and “Somebody Like You.”

His first Grammy came in 2004 for the album, “Be Here.” And he is here now with a vengeance. His “Golden Road” album was named by Billboard Magazine as, “the biggest country hit of the 2000-2010 decade.”

Grammies? The superstar has won four of them.

As important as the music is, fans demand showmanship, and Urban shines there. In that last concert I reviewed, he called for volunteers from the audience to join him on stage, winding up with a guy from Elizabeth City, N.C., who actually “took over” for about 10 minutes.

He enjoyed himself, Urban enjoyed him, and the audience had a blast, so at the next concert, it is possible such fun will be repeated.

If you love country music Keith Urban’s “Raise ‘Em Up” tour promoting his new album “Fuse” is a must-see.

While Urban invited a ‘grown up’ fan on stage, his opening act, Brett Eldredge, recently invited a little girl on stage to play guitar with him.

His cousin, Terry Eldredge is a member of The Grascals.

The other opening act is a Liberal — a Liberal, Kan., native who has had six Top-40 hits. My favorite album title from that artist is, “Judge Jerrod & The Hung Jury.”

Urban is married to the lovely actress Nicole Kidman, a fellow Aussie. They have two daughters.

During a 60-year career spanning newspapers, radio and television, Frank Roberts has been there and done that. Today, he’s doing it in retirement from North Carolina, but he continues to keep an eye set on Suffolk and an ear cocked on country music. Email him at froberts73@embarqmail.com.

Column – Psalms offers reasons to be thankful this season