A new era begins for Lakeland High School varsity field hockey as preseason practices are underway with a new face at the head of the program.

She was officially hired toward the end of May after activities director Gregory Rountree and principal Douglas Wagoner offered her the job. 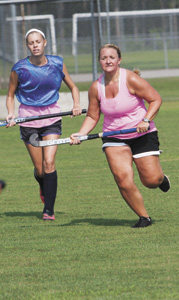 New Lakeland High School varsity field hockey coach Cortney Parker participates with her players during practice on Wednesday in preparation for the 2014 season.

Parker, a mother of three girls, ages 2, 4 and 6, said she talked it over with her husband and decided it could work.

“I was very appreciative, a little humbled, that they thought I could take over,” she said.

Rountree was convinced of her ability to do the job because of her history and success with Lakeland.

Parker was a student-athlete at the school and actually played for Coach Worley.

“I played for her for three years, field hockey and softball, because she coached both back then,” Parker said, referring to the 1999-2001 field hockey seasons and 2000-2002 softball seasons.

Parker has since coached in the Lakeland field hockey program for eight years, including two years as the junior varsity coach and six years as Worley’s varsity assistant.

“Coach Parker was right there by Coach Worley’s side,” Rountree said. “She even coached the team one or two times when Coach had to go out of town.”

He continued, “She’s my JV softball coach also, and she does a great job with those girls, so we have seen her in action, so we know she wouldn’t miss a beat.”

Worley established Lakeland as a perennial field hockey powerhouse during her 15 years as varsity coach, leading the Lady Cavaliers to a 250-46-3 record, including a state championship, two regional championships and more than a decade of dominance in the Southeastern District.

“It’s definitely a lot of pressure coming in behind her,” Parker said. “I think that’s scared a lot of people from applying to the job. But being with her for so many years and seeing how she’s developed the program and started it up, I feel confidence that we can continue building on what she’s started and established.”

Worley is excited that Parker is taking over.

“I’m happy that it was her,” Worley said. “I’m happy for the program.”

She expressed great confidence in Parker to continue Lakeland’s success, particularly in light of her having played for four years at Radford University.

“She has a collegiate knowledge that she could bring to that program that I couldn’t,” Worley said.

“She has the same effect, the same expectations, but has a different approach, which I think is better for this generation, honestly,” she said.

Parker, working with a very inexperienced team on the varsity level this year, said her goal is “to make them believe in themselves. Just because they come from this program, everything isn’t going to be handed to them.”