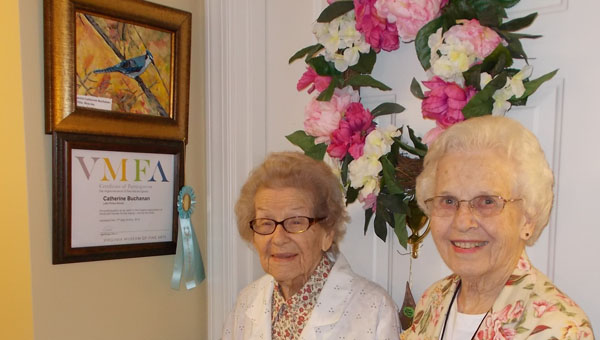 Kitty Buchanan and Betty Chapman, mother and daughter, live at Lake Prince Woods. Buchanan took up painting after moving there and even won an award in a statewide art show for retirement communities. (Submitted Photo)

When Betty Chapman wants to visit her mother, Kitty Buchanan, all she has to do is leave her apartment, walk four hallways and she’s there.

Betty and Kitty are both residents at Lake Prince Woods retirement community in Suffolk — Betty in a residential living apartment and Kitty in assisted living.

Betty moved to Lake Prince Woods less than a month after the continuing care retirement community opened in July 2002. She lived in the Sadler Heights neighborhood in Suffolk, only four miles from Lake Prince Woods, so she was able to drive by often and watch the building progress.

“I wanted to stay in Suffolk,” she said. “I didn’t want to move to Virginia Beach or some other area.”

She was one of a group who visited Lake Prince Woods’ sister community, Abernethy Laurels, in North Carolina prior to Lake Prince Woods being built. “I liked what I saw there and that helped seal the deal.”

When it came time to choose her apartment floor plan she chose a two-bedroom plan, hoping her mother would come and live with her, but that didn’t happen.

“I’m glad I went ahead and chose the two-bedroom floor plan, because I made the second bedroom a TV and sitting room, and that’s where I spend a lot of my time,” she noted.

In 2011 Betty’s mother, Kitty Buchanan, had some health issues that required her to have assistance, so at age 96 she moved to assisted living.

Shortly after Kitty moved to Lake Prince Woods, Activities Director Stephanie Lohr encouraged her to attend a painting class. Kitty had cross-stitched and sewn in the past but had never painted.

To her surprise, she loved it and was very good at it. In fact, in 2013 she won an honorable mention blue ribbon in the statewide art show for Virginia retirement communities.

The walls in her room are adorned with a number of her paintings, most of which feature either birds or animals.

Betty is glad her mother is close by and has a newfound talent.

“I’m happy I’m where I am,” Betty said. “I feel safe and secure and know that I’ll be well taken care of no matter what happens.”