Ferebee back in high school 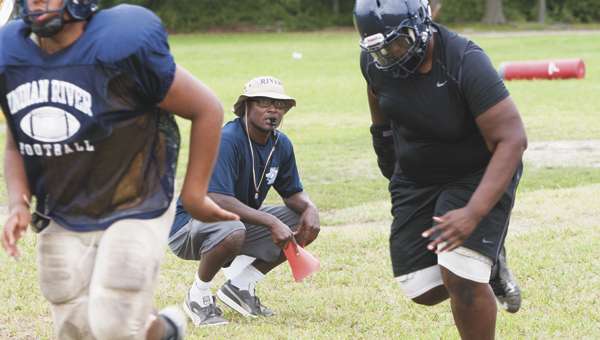 It has been more than a year since Glenwood Ferebee was helping Lakeland High School’s football team reach the playoffs for the second year in a row, and he has been through a quite a learning experience since then.

But he will once again cross paths this season with the Cavaliers, only this time as an opposing coach for Indian River High School, where he was recently hired.

After five years as head coach at Lakeland, Ferebee left at the beginning of 2013 to be a quarterback coach at Hampton University. He described what working at that level was like.

“It was pretty good,” he said. “It’s a cut-throat business. It’s a business that keeps you busy.”

After being hired, he was transitioned over into being the Pirates’ offensive coordinator and frequently worked 16-hour days in the offseason.

After Hampton’s poor start in 2013, Ferebee was fired. Having been hired only in July, less than a month before training camp started, his college coaching career turned out to be a short one.

He was the sixth offensive coordinator to serve under then-head coach Donovan Rose, who was entering his fifth year with the team and struggling to achieve consistent success.

Ferebee said taking the job had been a financial decision for him and his family, since he had been serving only as a substitute teacher at Lakeland, in addition to coaching football.

“When I went into it, I kind of understood that something might happen, because rumors were going around that (Rose) was on his last leg,” Ferebee said.

He was thankful for the college experience, but noted that compared to high school, the college coach gets to spend less time with this players.

“You don’t really get to connect with them like you do high school kids, really tap into their lives,” Ferebee said.

He relished that opportunity to more easily make a difference in players’ lives and decided to look for another high school coaching job.

“I applied everywhere,” he said. “My son lives in Georgia, so I applied for some jobs down there.”

Indian River went 1-9 last year. He said turning the team around will take “hard work and dedication, the same thing that I instilled in the kids at Lakeland.”

When the Cavaliers play the Braves on Sept. 19, he said, “It’ll be bittersweet, because some of those kids, I coached while I was there.” Were it not for his prior financial situation, he added, “I’d probably still be at Lakeland.”

Win or lose, he said he will still show his love for those Cavs.