The 2014 golf team at King’s Fork High School is undermanned and inexperienced, but coach Calvin Mitchell has his eye trained on helping it improve while hoping more will join its ranks.

Due to graduation, the Bulldogs lost five players from the 2013 squad, including Griffen Saylor, its No. 1 golfer, Destanie Fonoimoana and Jacob Nguyen, both in the team’s top four, as well as Corbin Morse and Rebecca Bangley. 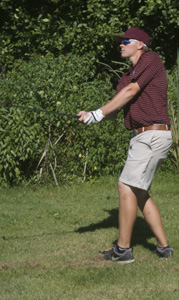 The team went 0-9 last year in the regular season, but fell only six strokes shy of going to regionals in the postseason. KF had two individual golfers qualify for regionals in Saylor and this year’s No. 1 player, rising senior Will Crow.

Crow and rising sophomore Noah Rose are the only players this year with significant golf experience. For some of the rest, “This is the first time they’ve walked on the golf course,” Mitchell said.

The Bulldogs are already three matches into the season and many KF players’ scores have not ended up counting. If players exceed a certain number of strokes on a hole, they are required to pick up their ball and move on to the next hole, disqualifying their score.

Mitchell knows inexperience is the issue.

“Right now, they haven’t played long enough for their scores to count, so they’re still learning to manage the golf course,” he said. “I expect all their scores to start counting by our fifth match.”

Crow has been leading the way for King’s Fork, as expected. Despite the Bulldogs’ season-opening team loss to Great Bridge High School on Monday, he was medalist, shooting an 85.

“We’re working on his patience and working on changing his strategy to bring his scores down,” Mitchell said. He has shown great improvement from last year’s average. “His average was 91, and now it’s about 86, 85, and we’re trying to get him into the 70s. That’s his goal.” 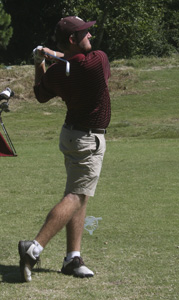 King’s Fork High School rising senior Will Crow, competing on Thursday, is the Bulldogs’ No. 1 golfer this year and has already cut about six strokes off his average from last season.

Senior Stephen Shaffer, a new golf team member coming from the world of baseball, is among the top three on the team and is working to be consistent.

“He’s been able to translate the eye-hand coordination from baseball pretty good into golf, and he comes with some power,” Mitchell said.

Junior Briana DelaEspriella comes from track and field and is working for her scores to count, and freshman Michael Holland rounds out King’s Fork’s undersized team.

“We are still looking for additional players,” Mitchell said.

King’s Fork (0-3) is next scheduled to take on Nansemond River High School on Wednesday at Sleepy Hole Golf Course.