It was all hands on deck Friday when about 130 sailors with the USS Abraham Lincoln volunteered to get seven Suffolk public schools shipshape for the new instructional year. 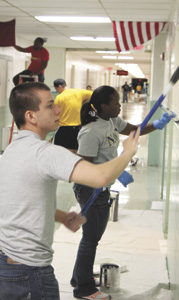 At John Yeates Middle School, Daniel East and Makeisha Ervin, sailors with the USS Abraham Lincoln, apply some paint in a corridor with their shipmates. About 130 Navy service members came to Suffolk on Friday to spruce up public schools before classes start in two weeks.

“Right now, we have 1,500 sailors across the Hampton Roads area doing community relations projects,” said Cmdr. Chris Haden, combat systems officer of the Abraham Lincoln, at John Yeates Middle, where his men and women were painting hallways, classrooms and areas.

“We came here to paint the school and get it ready for students in the next couple of weeks.

The Abraham Lincoln has been at the Newport News shipyard since early 2013, receiving a “mid-life overhaul.”

“She’s been in service for 25 years, and we are getting her ready for another 25 years,” Haden said.

Bethanne Bradshaw, spokeswoman for the school district, pointed out that the volunteers were unsolicited.

“To have a group call and say, ‘Do you need 130 pairs of hands to get ready for school?’ It was just kind of cool,” Bradshaw said.

“It was the first time we have been approached by a command like that.”

“They were here before we even opened the building, just listening to music and gearing up for the event,” he said.

Mid-morning at the front of the school building, the bracing strains of Metallica’s earlier hits blasted from a Jeep with the soft top down. Sailors Andrew Smith, Ben Arnold, Robert Duffy and Rick Davis brushed paint onto the concrete pillars.

Skinner came out from his office to see how the work was going and thank the workers.

At Turlington Woods, Brian Caballero and Frenchie Johnson were attacking weeds in the parking lot with edge trimmers, while other sailors painted inside.

“We focus on building a relationship with the community,” Warrant Officer Laila Salmaan said. “Wherever they are hurting at, we’ll just provide service to wherever it’s needed.”

At John Yeates Middle, Master Chief Cornelius Bartley said it was a great team-building exercise for the sailors.

“It gives us a sense of pride, knowing that we came out and did something in the community,” he said.

“We look as the camaraderie aspect of it. It’s not every day that we go to a school and paint.”