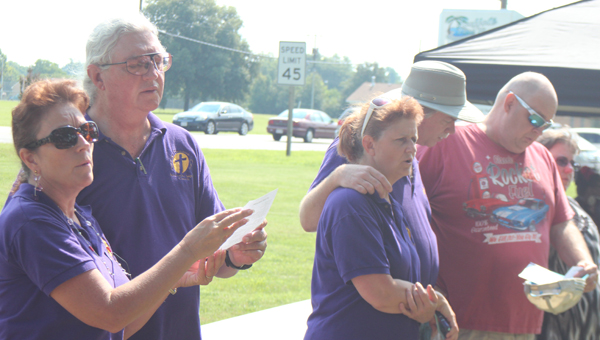 Lorrie and Bobby Davis, Julia and Ron Ward, and John Street sing gospel songs during the fifth annual Fathers as First Teachers on the First Day of School event, held at a vacant lot on Pruden Boulevard on Saturday.

A community event at a vacant lot on Pruden Boulevard on Saturday sent fathers the message that they need to be involved in their children’s lives, and especially their daughters’ lives.

Princella Johnson, founder of Fathers as First Teachers on the First Day of School co-host the Y2K Academy, said that God inspired her to start the event five years ago.

“I was given inspiration to help fathers connect with their children, understanding that fathers have a big influence in helping their children make better grades in school, and also preventing children dropping out,” she said.

Turner said he has used his own parents as resources to help him raise three boys, 17, 27 and 28.

“Time’s a commodity that’s hard for everybody, but making time” to spend with children is important, he said.

“I served 20 years in the military, and now I’m a firefighter, so time can be precious. But it’s just necessary.”

Princella Johnson’s husband, Maurice Johnson, spoke on the importance of sound parenting skills. “We are our children’s first teachers as to what a relationship is between a man and a woman,” he said.

“What have you taught your children so far? They hear what we say, but they do what we do.”

Fathers have an especially great responsibility to be a positive influence on their daughters, Maurice Johnson said. He asked fathers in the audience to consider whether they’d be satisfied if their daughter brought someone like them home, “because that’s what they’re going out into the world looking for.”

The event holds a special place in the heart of Princella Johnson, also the pastor at The Master’s House Church. The first year she did it, her brother, Clint Larue Jackson, died right in the middle.

“I had to fly from Suffolk all the way to Alabama and do the last rites … as he had suffered a major stroke,” Princella Johnson said.

Clint Larue Jackson had returned home from the Iraq war to be a much better father to his two daughters and one son than he was before, his sister said, which inspired her to keep the event going.

“I thought that meant I shouldn’t do this anymore, and I planned not to do it; but the Lord placed in my heart to do this as a memorial to him,” Princella Johnson said.

During the event, the academy offered a free suit to fathers who take their children to the first day of school.

“Parents are the first teachers in a child’s life, and if parents don’t put emphasis on education, children won’t feel it’s important,” she said.