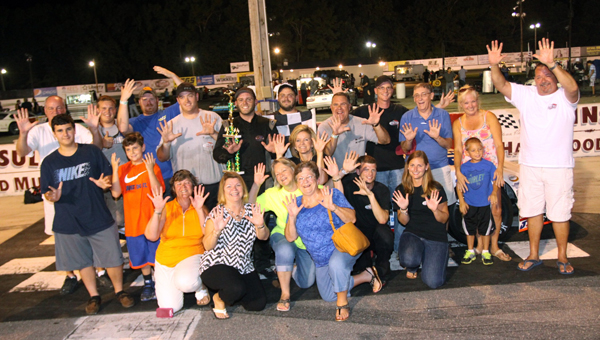 Matt Waltz with a huge family gathering in Victory Lane after his victory in the “Reinhart Foodservice 150” for the Comserve/Verizon Wireless Late Model Stock Cars at Langley Speedway. (Bill Carr/MotorSports Photo News Service)

Matt Waltz moved out front on lap 67 and sailed to his 10th win of the season in the Reinhart Foodservice 150 for Late Model Stock Cars series Saturday at Langley Speedway.

Division leader Greg Edwards started on the pole, at 88.758 miles per hour, and took the lead on the opening circuit. Waltz shared the front row with Edwards but slipped up the track as the field headed into Turn 3 for the first time, dropping to seventh.

Waltz had clambered back into third by the time the second, and final, yellow flag waved on lap 60. Bunching for a restart, Edwards opted for the outside lane, ceding the inside to second-place Nick Smith. Waltz followed Edwards’ cue and lined up on the leader’s bumper.

Back under green, to begin lap 65, Edwards quickly dispensed with Smith. Waltz tagged along, then motored to the outside of Edwards on lap 66. On lap 67, Waltz surged ahead on the backstretch.

For the next several laps, Edwards poked a fender underneath Waltz in Turns 1 and 2. He couldn’t complete the pass, though, as Waltz kept up a head of steam off the second corner.

Closing in on lap 100, Waltz finally gained the clear-cut edge over Edwards and began to pull away. By the finish, Waltz had extended his winning margin to nearly a full straightaway.

Edwards was second to the line, while Nick Smith, Brenden “Butterbean” Queen and Mark Wertz rounded out the top five.