The Hampton Roads military community has been involved in the Out of the Darkness Community Walk for several years.

Started by Chesapeake psychotherapist Chris Gilchrist in 2006, the event at Mount Trashmore raises awareness of mental health issues and suicide while allowing participants to remember departed loved ones. 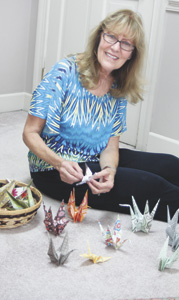 Psychotherapist Chris Gilchrist sits on the floor of her office in Western Branch with a few of the thousands of origami cranes that will symbolize healing and hope during the ninth annual Out of the Darkness Community Walk in Virginia Beach.

After initial reluctance, the military first got involved in about 2010, Gilchrist says. Now, counselors attend from every military branch, and many naval commanders walk. Last year, five Air Force squadrons were represented.

This year’s event will be supported by a group of sailors a long way from Virginia Beach who are also taking the fight to an army of terrorists that have appalled civilization.

Aircraft carrier USS George H.W. Bush left its Norfolk home port in March, entering the Persian Gulf in June, when ISIS jihadists were seizing control of vast swaths of Syria and Iraq, killing anyone refusing to convert to their Sunni version of Islam.

Earlier this month, fighter jets on the Bush began an ongoing campaign of airstrikes against ISIS, making inroads in halting the militants’ advance and reclaiming territory lost to them, U.S. officials say.

“They are going to have a walk on deck,” Gilchrist, who has been helping organize it via emails, said of how an unknown number of the carrier’s sailors plan to join the walk from many miles away.

The anti-suicide and depression event incorporates thousands of origami cranes, which symbolize healing and hope. Gilchrist says she has sent to the Bush 500 cranes already folded and about the same number of pre-cut sheets with instructions on how to fold them, “in case they want to make a full 1,000.”

“This is minor compared to their overall mission,” Gilchrist said. There has been discussion that the walk will be held on the upper deck, but it might end up happening on the hangar deck, she said.

While the event is planned for Sept. 6 in Virginia Beach, with a rain date of Sept. 13, participants on the Bush — which was also involved last year, though on home soil — are planning to walk on the weekend of Aug. 30-31 to accommodate their important mission, according to Gilchrist.

“It’s such a strong statement of the ship’s leadership and commitment to prioritize good mental health and suicide prevention for the sailors,” Gilchrist said.

For the fifth year running, last year’s event in Virginia Beach was the largest of more than 300 Out of the Darkness Community Walks around the nation, Gilchrist says, with 4,500 registered walkers.

Registrations for 2014 will be accepted at www.sos-walk.org/sos/register.htm until the deadline of Sept. 5 at noon.

The event is sponsored locally by the Hampton Roads Survivors of Suicide Bereavement Support Group, and raises money for the American Foundation for Suicide Prevention.

Gilchrist said she started the walk on the suggestion of three sisters who lost their mother to suicide.

The sisters were attending a bereavement group Gilchrist had started years earlier. They said, “’There’s a walk in Chicago. Can we walk?’” Gilchrist said.

Gilchrist, whose offices are in Western Branch, said she agreed to the request naïve of what it would require and what it would become.

“People will reflect to me that this is the strongest example they have seen of civilian and military communities coming together for a common cause,” she said.