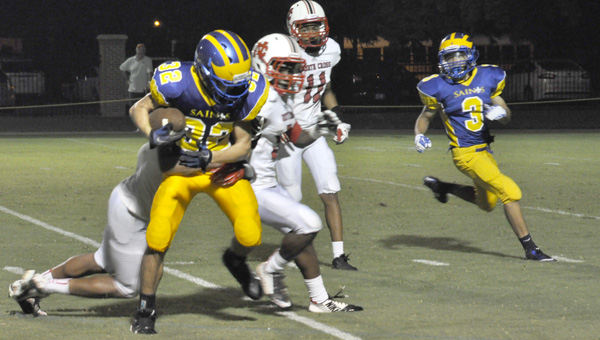 Within the confines of a muggy Friday evening in August, Nansemond-Suffolk Academy’s football team found itself in an offensive slugfest during the first half of its season opener against North Cross School, the Saints barely leading 32-26 at the half.

But amid a sea of cramps in the second half, NSA’s offense kept chugging and the defense clamped down on the Raiders to pull away for a 66-32 win.

“We knew coming in they had the weapons on offense,” NSA coach Lew Johnston said of North Cross. “What I was most pleased with was our halftime adjustments.”

They were crucial to the effort because of what ensued within the final three minutes of the first half.

Nansemond-Suffolk junior Noah Giles ran in a touchdown from 73 yards out, and sophomore Keshaun Moore scored the two-point conversion to give the Saints a 24-6 lead with 2:58 to go.

The Raiders responded with a 39-yard scoring toss with 1:53 left. NSA turned it over on downs about 50 seconds later, and 25 seconds after that, North Cross scored on a 60-yard touchdown pass and two-point conversion pass, making it 24-20, with 40.4 seconds left.

NSA senior Addison Peak returned the ensuing kickoff about 85 yards for a score, followed by a Gough two-point conversion with 25.8 seconds on the clock.

But the Raiders got the last word of the half when they pulled off a 50-yard touchdown pass at the 10.3-second mark.

“We’ve had a lot of first halves like that, but it’s good to know that we came through in the second half, and they weren’t able to hang with us,” Gough said. “They’ve got a lot of talent on their team, but so do we, and I’m glad we could persevere and come out on top.”

Gough ran for 140 yards, two touchdowns and three two-point conversions on 13 carries, before going down with an ankle injury.

He commented on how the ankle felt after the game when he said, “Not great right now, but I’m sure I’ll be OK.”

Johnston said, “I was really pleased that we just kept pounding on offense, and that three-headed monster — you’ve got David, Addison and Noah — it’s tough.”

Giles had the most monstrous numbers on Friday, carrying the ball 11 times for 162 yards and three touchdowns. Peak had nine carries for 111 yards, a touchdown and a two-point conversion.

“We had a couple decent passes to keep them honest,” Johnston said, as junior quarterback Noah Serianni passed for around 100 yards.

Johnston said some lack of preparation on the part of the Saints helped account for two of the Raiders’ big passing scores in the first half, as only 10 NSA players were on the field at those times.

But poor defensive play was a big factor in what left Nansemond-Suffolk up by only six points at halftime.

“We came out the second half, we changed a coverage, a new blitz and that settled us down,” Johnston said.

Juniors Reed Browne and Cole Christiansen each came up with interceptions to kill North Cross drives. Browne also scored on a short rushing touchdown for the final score of the game.

Senior CJ Patterson put pressure on the Raiders’ quarterback with a couple of sacks.