U.S. Sen. Mark Warner says he’s hoping Virginia voters will return him to Washington for another term this fall.

The governor of Virginia from 2002 to 2006 who began his first term in the Senate in 2009, Warner says he will work to get things done. He faces two challengers on Nov. 4 — Republican Ed Gillespie and Libertarian Robert Sarvis. 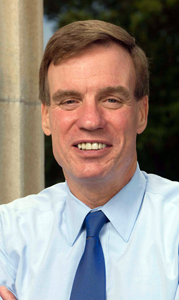 Most Virginians probably remember his performance as governor, Warner said.

Warner, a Democrat, says he always starts with a Republican partner for his initiatives.

“If you build from the center out, it makes more sense,” he said.

Warner said he sees one of Washington’s biggest problems as a lack of engagement from the electorate.

“What we need to show is we can actually wrestle with these problems,” he said. “I don’t believe we’re nearly as partisan and polarized as sometimes the national press says. (Voters) just want us to go up there and do our jobs and get things fixed.”

Speaking by phone, Warner said he had just left a session with disabled veterans, listening to them about their frustrations with the Veterans Affairs medical system.

“I’ve been trying to get into how we fix these problems with the VA,” Warner said, noting he had approved about $16 billion for services there. “But money alone isn’t going to fix this problem. It’s going to take a new attitude of people who work at the VA. I’m trying to see how we can blend some money and some new ideas.”

Warner also said he wants to avoid another round of cuts known as sequestration, which is set to come around in October 2015 unless Congress moves to avoid it.

“It’s probably the single area I’ve worked most on in the Senate, is trying to get a budget deal in place,” Warner said. “We all know we have to be smarter in how we spend our defense dollars, but there’s a smart way to cut and a stupid way to cut. Sequestration’s a stupid way to cut.”

Cutting defense and infrastructure, Warner said, hurts everybody — but Hampton Roads in particular.

To that end, Warner said, diversification of the Hampton Roads economy is important. In some areas, expertise developed primarily for the military — such as Suffolk’s modeling and simulation community — could benefit other areas.

“I still believe there’s great possibilities in modeling and simulation in the Suffolk area,” Warner said. “How do we make sure those businesses have customers other than just the Defense Department? That can be a real growth area for Suffolk and Hampton Roads generally.”

Warner also spoke to the tax code and making “small changes” to certain programs, such as Medicare and Social Security, “so they’re going to be here 30 years from now,” he said.

“We don’t need to make major changes, but we need to get us pointed in the right direction,” he said. “That will free up some additional resources.”

Education reform is another area Warner would like to tackle in his next term, including what he calls the over-reliance on student tests.

“We need to worry about quality of education rather than how many tests you can take,” Warner said.

Finally, he spoke to student loan debt, a factor that now stands at $1.2 trillion, Warner said.

“I hear all the time about how they can’t take a risk or anything because of their crushing student loan debt,” he said. He’ll support income-based payments and refinancing at cheaper rates to help relieve the burden, Warner said.