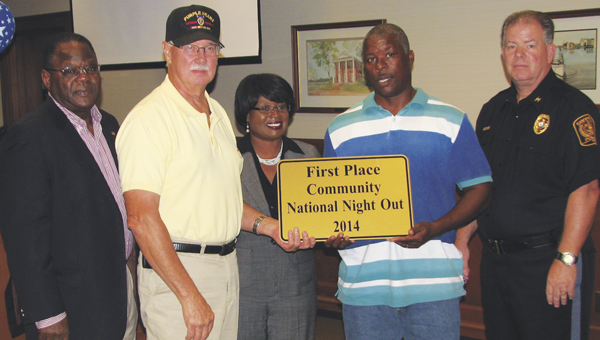 Everybody was a winner in the 2014 National Night Out crime-fighting event, but some special winners were recognized during a Tuesday ceremony at City Council chambers.

“I would put up our event against any city in the country,” Police Chief Thomas Bennett said Tuesday. “I’ve never seen one like this, and I’ve seen a lot of them.”

National Night Out, which took place this year on Aug. 5, is sponsored by the National Association of Town Watch to present a united front against crime in neighborhoods across the country. It also serves as a venue for folks to get to know their neighbors and the law enforcement officers who protect their areas.

“It’s a night when not only memories are made, but relationships are forged,” city spokeswoman and National Night Out coordinator Diana Klink said.

Vice Mayor Charles Brown said everybody seemed to be having a good time on National Night Out, and that attendance seemed to have increased from previous years. He also encouraged guests to help fight crime in their neighborhoods.

Thousands of communities and millions of residents participate each year, but Suffolk’s event routinely places in the top five among cities its size as judged by a national committee.

The announcement of Suffolk’s placing will come later, but Tuesday was a day for the city’s communities to get their awards, judged by youth and adult volunteers on the night of the event on criteria such as how the event was advertised, the activities and organization of the event and whether crime-fighting was highlighted at the event.

Coming in first place for combined communities was an event held at Sentara Obici Hospital that included a number of surrounding communities, including Applewood Farms, Burnett’s Mill, Hillpoint Farms, River Bluff and the YMCA.

The Rookie of the Year Award went to Mansfield Farms Homeowners Association. The Best Business Award went to Target, which is a national sponsor of the event and locally provided a grant for several communities to have a National Night Out banner at the event.