Russell ahead of the curve

Most of the time when someone hits a hole in one, that golfer is substantially older than 16-year-old Brian Russell.

But in mid-August, Russell broke into the ranks of players to hit an ace, achieving one from about 113 yards out on the par-3 No. 2 hole at Portsmouth’s The Links at City Park Golf Course.

“I feel like it was just, you know, a miracle,” Russell said. 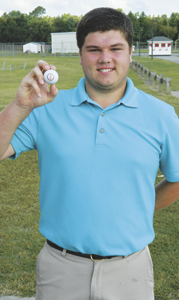 Sixteen-year-old Brian Russell of Suffolk holds up the ball that he recently sent to the cup in one shot on the No. 2 hole at Portsmouth’s The Links at City Park Golf Course.

As he was waiting for the group in front of him to finish, he was trying to decide on what club to use. He devised a strategy involving a pitching wedge and hit the ball.

“It landed about five feet past the pin and spun backwards,” he said. “I had to hit it around the tree branch that was hanging over the fairway and kind of fade it back to the line of the hole.”

He said he was able to get the ace in this instance due to focus, instinct and an early start in the sport.

“I’ve been playing golf since I was 3 years old,” he said. “When I was about 3, my dad bought me a set of clubs, and I’d go out to the range with him every once in a while, and I’d hit some balls with him.”

His father, Jay Russell, has had an understandable reaction to his son’s accomplishment.

“I couldn’t be more proud of him,” the elder Russell said. “He’s a great kid, and he loves sports, especially baseball and golf, and he’s really kind of caught the golf fever in the last year or so, and I don’t think he’s grasped the gravity of what he’s actually accomplished.”

Underscoring the significance of it, Jay Russell pointed to statistics on aces. According to the National Hole-in-One Association, the actual odds of making a hole in one on a par-3 hole for an amateur are 12,500 to 1.

And because of the overhanging tree branch, “He couldn’t really get a straight shot at it,” Jay Russell said.

For the nine holes he played that Saturday, Brian ended up shooting a 27, while his typical average these days is around a 44.

Formerly, he dedicated more focus to baseball, but has since given golf the priority.

Brian, a junior at Nansemond River High School, plays for the school’s golf team. Though he had been playing and practicing quite a bit during the week, the day he got his ace was a day off in which he wanted to put in more work by himself.

“We’re really happy that he has taken that initiative,” Jay Russell said.

“There’s nothing like standing on a golf course,” Brian said.