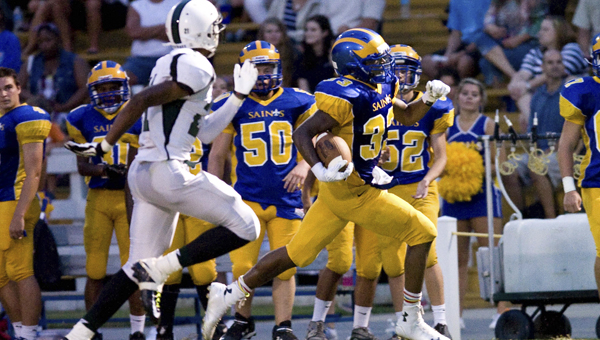 Nansemond-Suffolk Academy’s offense was multi-faceted on Friday night against visiting Saint John Paul the Great Catholic High School, but whether the yards and points were coming through the air or on the ground, the name the Wolves had to blame was often the same.

“They were going to do what they could to stop our running game,” he said, so the home team turned to the pass.

In the first quarter, Serianni connected with Giles for a 67-yard touchdown.

The Wolves were able to respond later in the quarter, but the Noahs dominated the second quarter. First, Giles ran for a 65-yard touchdown, then later, Serianni dropped back and completed a pass to senior tight end C.J. Patterson for a 10-yard touchdown.

“It’s pleasing to know that if people are going to stack their defense that we’re going to be able to throw the football and throw it well,” Johnston said.

The Wolves proved they would not go quietly later on in the second half, though.

“We had things well in hand and started subbing a bunch of kids, and (Wolves coach Jerry Sarchet) kept his first team in, and all of a sudden we looked up and they scored two touchdowns,” Johnston said.

Saints starters returned to the field to ensure the Wolves would not close the gap any more.

“It’s tough when you’re up by 35 to keep playing hard, but it was a good win,” Johnston said.

Saint John Paul the Great generated 255 yards of offense, with one passing touchdown and three rushing touchdowns, but they struggled with issues that often plague teams at the beginning of a season.

Johnston compared this contest to last year’s 40-16 victory over the Wolves.

“I think the biggest difference (this year) was the fact that it was their first game and it was our second,” he said. “They had several bad snaps, the timing was off in the backfield.”

Johnston estimated the NSA defense also was able to drop them around eight to nine times for losses.

“With the new offense we were just hoping we’d be able to get accustomed to it and the kids would feel comfortable, but wow, their coach after the game was very complimentary,” Johnston said.

But success would not have been possible without the skill players, like Giles, who had two receptions for 124 yards and two touchdowns and six carries for 122 yards and one touchdown.

He also took the opening kickoff about 85 yards for a score.