A year after the city’s new ordinance prohibiting unattended tethering of dogs went into effect, police say the law has been accomplishing its desired purpose even without much official enforcement action. 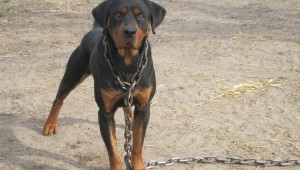 A People for the Ethical Treatment of Animals employee shot this photo of a chained dog on Butler Drive in Suffolk in December 2011.

Lanier said animal control officers did not start issuing summonses until December to give folks time to learn about and comply with the law. Some people were in the process of building pens, installing invisible fences and fencing in their backyards, city spokeswoman Diana Klink noted.

“We saw a lot more pens going up versus dogs being tethered,” Lanier said.

In the year since the ordinance went into effect, the police department has fielded 162 calls about tethering. Of those, 92 were not in violation — the owners were outside with the dog, the dog was inside when the officer arrived or the call was otherwise cleared as unfounded, Klink said.

At 70 of the calls, the officer found a tethered dog and issued a verbal warning to the owner. Four summonses were issued for violations.

Only one of those four was convicted of the charge, Lanier said.

Suffolk Police Department Maj. Stephanie Burch deemed the law successful even with the low rate of summonses and convictions.

“The goal of the ordinance was always, to the degree possible, voluntary compliance,” Burch said. “Not every law requires enforcement to be effective.”

City Councilman Mike Duman, who initially brought the topic up for discussion on City Council, said he is pleased with what he’s heard about the effects of the ordinance.

“It effectively has eliminated the abusive treatment of the dogs that previously were subjected to inhumane tethering,” Duman said. “By our actions, we demonstrated Suffolk is a progressive and compassionate city. I’m really ecstatic about the results.”

Michele Thames, executive director of the Suffolk Humane Society, which supported the law, said the law has been a success from the society’s point of view as well.

“We’re always super excited when the city moves toward treating animals with dignity and respect and working with groups to find a common ground,” she said.

Thames said the society has received fewer calls regarding dogs left outside. Many people call the humane society confusing it with animal control, she said.

“If someone does call us, now we have a place to refer them to where there’s some teeth behind it,” she said.