The Lakeland High School football team made its disappointing 49-14 loss on Aug. 29 easy to forget thanks a clutch 33-27 win on Friday night.

The Cavaliers jumped out to an early 20-0 lead over the visiting Great Bridge High School Wildcats but found themselves trailing 27-20 with 4:21 left in the third quarter. 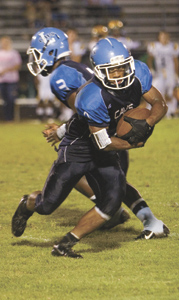 Lakeland High School senior running back Jordan Stokley proved to be too much for visiting Great Bridge High School on Friday night. He had touchdown runs of 80 and 22 yards, the latter of which proved to be the game-winner. The Cavs improved to 1-1 with the 33-27 victory.

Both Lakeland’s offense and defense had been struggling against the Wildcats in the second and third quarters, but the Cavs’ offense came back to life late in the third through the legs of senior running back Jordan Stokley.

“We didn’t make any adjustments at all,” Cavaliers coach Bryan Potts said, noting that Stokley had success early. “We just stuck to the script, and we told them at halftime we’re not going to do anything different.”

Stokley got Lakeland to the Wildcats 3-yard line and senior quarterback Miles Goodman ran it in on 4th-and-2. The extra point attempt that turned into a two-point conversion attempt failed, leaving the Cavs behind 27-26.

Great Bridge limited its passing for much of the game and had great success on the ground, but Lakeland’s defense stiffened in the fourth quarter after Potts made an adjustment on the defensive line.

“Even though they had some success running the football, I told the guys no matter what we’re going to fight to the end,” Potts said.

A Wildcats fourth-quarter drive sputtered in their own territory and a bad snap on third down forced them to punt from behind their own 21-yard line. The punt ended up being short and Lakeland took over at the Great Bridge 29-yard line.

After a few runs by Stokley, he finished off the drive with a 22-yard touchdown run up the middle. The successful extra point by sophomore kicker Adam Worley made it 33-27.

The Cavaliers defense stopped two more drives by the Wildcats. On the visitors’ final drive, they continued trying to run the ball, and Potts said, “They tried to bounce it outside of us, and we did well on the edges.”

Lakeland’s pass defense emerged again with 10 seconds remaining when it grabbed an interception and ran it out to the 35, but a defensive holding call gave Great Bridge one final chance with no seconds left on the clock at the Cavs’ 20-yard line.

The Wildcats’ final pass went out of the back of the end zone, and Lakeland had its win.

“It means everything,” Potts said. “It just let us know that we’re moving in the right direction, and it was big.”

He said he was proud of his team’s resolve and noted some of the standouts.

“Jordan was hot tonight,” he said, estimating that he ran for more than 200 yards.

Stokley had two touchdown runs, including one from 80 yards out.

Sophomore Alajuwun Langston returned the opening kickoff about 98 yards for a touchdown.

“He continues to be huge,” Potts said, noting he returned a kickoff for a score last week, as well.

Senior quarterback Miles Goodman had two short rushing touchdowns on the night and drew praise from Potts for his overall play.

“I think Miles did a much better job of managing the game,” the coach said. “He stuck to what the coaches asked him to do.”

Potts spread much praise around to his defense.

“The whole secondary did a wonderful job as far as their coverage,” he said, highlighting senior Convon’Tra Revell, junior William Barnes and junior Andre Drayton.

While the Cavs were not perfect in terms of discipline, the coach said they were much better than last week, and he was pleased with the attitude he saw coming from his players, as well.

“They have a much better spirit about them, and that’s showing growth,” he said. “They stick together.”

Lakeland (1-1) has a bye next week and will return to action Sept. 19 at Indian River High School.