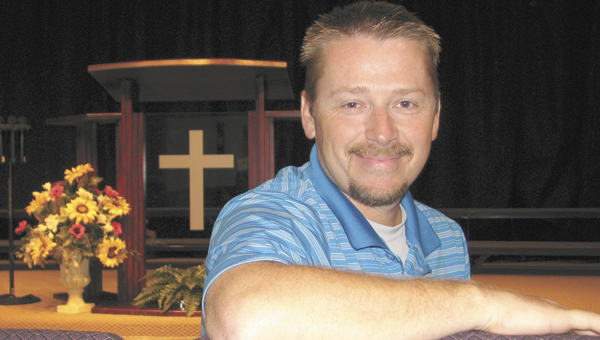 Pastor David Sexton shows off CrossPointe Church’s sanctuary in its building on Pruden Boulevard, which is a converted funeral home. The church will celebrate six years of existence, and four years in its building, this weekend.

CrossPointe Church will celebrate its sixth anniversary — and four years of having its own building — this weekend at its location at 2460 Pruden Blvd.

“It’s really been just amazing to see God work,” said Pastor David Sexton, who has been with the church since it started.

Sexton said the church moved to its new building with just a couple of families but now welcomes anywhere from 125 to 140 worshipers on Sunday mornings.

“In order to become self-supporting in six years, it’s been a God thing,” Sexton said. “It’s been because of the faithfulness of the people and of God.”

Sexton said the church’s associate pastor, Marc Neppl, will leave at the end of this year to plant a church in Portsmouth.

“We believe in church planting,” Sexton said. “We believe that’s the best way to get the gospel out there.”

People without a current church home are more likely to visit a new church than an established one, Sexton believes. That’s why the church believes that multiple church plants are the way to take God’s word to the masses, and the church plans more plants, he said.

This Saturday, the church will hold a free community day from 4 to 7 p.m. with hamburgers and hotdogs, cotton candy, bounce houses and other children’s activities.