The Nansemond-Suffolk Academy football team has had to prepare for this week’s road game in Lynchburg in the wake of last week’s narrow loss, but the path has been difficult as other kinds of losses have kept coming. 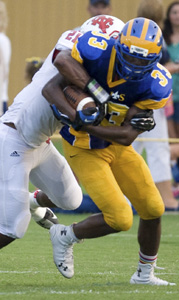 Contributions from Nansemond-Suffolk Academy junior running back/defensive back Noah Giles will be even more important this afternoon with all the injuries plaguing the Saints. (Janine DeMello photo)

This focus will prove to be more important than ever as injuries have become a major issue for NSA just three games into the season.

“We’re so beat up now,” Johnston said, leading off the list with a standout sophomore linebacker/fullback. “Ke’Shaun Moore has a small fracture in his thumb that he got against (Saint) John Paul the Great (Catholic High School).”

Moore had been taping it up, but it got worse against Fredericksburg, and this week he ended up having surgery in which two pins were inserted in his thumb. The doctor said he may be ready to play in three or four weeks, though it will depend on how quickly the bone heals.

“He caught the touchdown pass and stepped in a hole in the end zone, and the knee jammed,” Johnston said.

Johnson could possibly be out three to four weeks.

Senior offensive/defensive lineman Shay Wood hurt his knee in the season opener. After returning against Fredericksburg, he pushed it too far in the close contest and re-aggravated the injury. He will sit today with the plan being for him to return next week.

Junior Graham Moore, a starting safety and punter, pulled his hamstring in practice on Friday, and it is unlikely he will play today.

To deal with these kinds of setbacks as a coach, Johnston said, “You look on the positive side. You tell these backups and younger kids at the beginning of the season that you never know when your opportunity is going to come and you’ve got to be ready, and here it is.”

Sophomore Jack Bivins will move into the linebacker position for Ke’Shaun Moore, senior David Gough will punt for Graham Moore and junior quarterback Noah Serianni will add on the role of safety.

Sophomore Edwards Morgan and freshman Chris Murphy will fill in for Wood and Johnson.

Nansemond-Suffolk faces Virginia Episcopal School, which has had one common opponent with the Saints this season — North Cross School. The Bishops fell 54-0 against North Cross and recovered in their second game to defeat The Covenant School 17-14.

“They run a lot of our offense,” Johnston said, later adding, “They’ve got some athletes.”