Bulldogs look to volley for states

The King’s Fork High School boys’ volleyball team took a step toward the form their new coach expects from them on Tuesday evening with a 25-15, 25-13, 25-21 victory over host Nansemond River High School.

Former Bulldogs coach Joseph Burns decided to take a different position, opening the door for his assistant coach, Angelique Gatling, to take charge of the team. 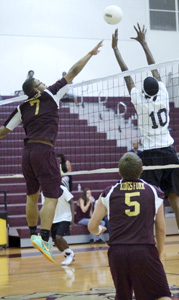 “This is my second year actually coaching volleyball, but I played volleyball in high school and in college,” Gatling said, referring to Nansemond River and South Carolina State University.

She helped shape the success King’s Fork experienced last year when it went 15-10 overall, winning the Ironclad Conference regular season and tournament championships — the first championships of any kind claimed by the school’s volleyball program.

The Bulldogs made it as far as the first round of the regional tournament before their 2013 season ended.

They lost only two players from the team due to graduation, though outside hitter Mark Kluck was a key contributor.

This year’s squad is stocked with experience.

“My expectations were set pretty high for this year being that we had all five seniors and mostly juniors,” Gatling said, looking for the team to go as far as the state tournament. “That’s my expectation, if they play up to their potential.”

However, there have been bumps along the way as the Bulldogs (6-4, 2-0) adjust to a new coach and coaching style and as they struggle to base their level of play on their potential rather than on the strength of the opponent.

King’s Fork opened the year with several losses to Southeastern District foes but have now defeated Lakeland and Nansemond River high schools, while also putting up a strong performance in the Endless Summer Tournament this past Saturday in Virginia Beach.

The Bulldogs won four out of five matches in the tourney, taking third place in the gold bracket.

“So, that was a good tell-tale (sign) as far as how we should finish our season out,” Gatling said.

Bringing a lot of heart, “he covers the floor at any given time the team really needs him,” Gatling said. “He’s the man to keep the ball in play.”

Gatling said, “I want to get Cal to be able to hit a little bit more,” and she wanted to lighten the load of setting duties he was shouldering, so she asked Leary to help out.

“It’s actually helped us turn around our record,” she said.