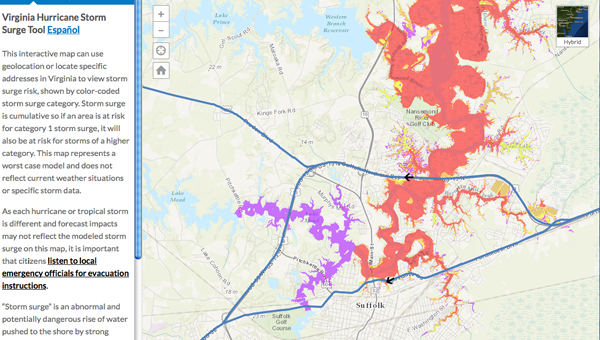 A screenshot of the state’s storm surge mapping system shows the downtown and surrounding areas as well as evacuation routes.

The old adage in hurricane preparation is “Hide from wind, run from water.”

With a new tool created by the Virginia Department of Emergency Management, folks in Suffolk and surrounding localities will have a better idea of whether they will need to run from the water when a hurricane is on its way.

The map, which is based on Geographic Information System technology, allows folks to search for their home address and see where storm surge flooding may occur on their property or nearby.

“It lets an individual take more responsibility for their own preparedness,” said Capt. James T. Judkins of the Suffolk Department of Fire and Rescue and the local emergency manager. “People like to manipulate their own devices now. It will be a good experience for an individual who’s particularly savvy with their tablet or computer.”

Storm surge is the abnormal and dangerous rise of water, over and above the normal tide, that is pushed to shore by strong winds from a hurricane or tropical storm system.

Every storm is different, so the exact amount and extent of storm surge may not reflect the modeled storm surge on the state’s map, according to a press release from the Virginia Department of Emergency Management. It’s also not a real-time map, so folks should pay attention to actual conditions and listen for local evacuation instructions during a storm.

Judkins has been providing GIS-based storm surge maps for Suffolk residents since 2007, he noted, and he can add layers, such as property lines, that the state map doesn’t have.

But the online GIS tool is more user-friendly, Judkins noted.

“The end result’s still the same,” he said. “You know whether or not you’re in a surge zone.”

He said anyone — current residents, prospective buyers, business owners and visitors — can benefit from using the tool.

“Water is 90 percent of the problem,” he added. “It creates more hazards than the wind.”

The map is available at www.ReadyVirginia.gov. It also shows evacuation routes.