Warriors struggle on the court

It has been an unquestionably difficult year so far for a Nansemond River High School boys’ volleyball team that is long on age but short on experience. 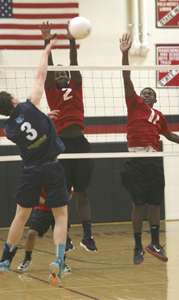 “We’re just not performing like we should,” NR coach James Vann said.

The loss dropped Nansemond River to 0-8 on the season. It is a significant step back from last year, when it finished 8-11 overall, and from 2012, when it finished with a winning record overall and in the Southeastern District.

The Warriors lost eight of the players that made up the 2013 roster. Six of them graduated, and two more are not playing this year.

Two of the graduates were particularly key contributors, including Adrian Coleman and Adrian Drew, who was the 2013 Ironclad Conference Player of the Year for boys’ volleyball.

“We keep getting guys that are upperclassmen coming out,” Vann said.

While upperclassmen are ordinarily what coaches want, the problem for Vann is that some of them have logged very limited court time and are still learning the game. By the time they have it down, the season is over, as is their high school career.

The Warriors feature a few returners from last year along with a sea of new faces, and the team, as a whole, has not met Vann’s preseason expectations.

He said one of the big challenges has been getting the less experienced players to buy into a scheme, rather than playing more informally.

There are some standouts, though, that Vann counts on to help lead the team, including senior outside hitter Malcolm Nurse, who brings experience.

“He knows how to swing and attack well,” the coach said, noting he also plays well in the back row.

Senior opposite hitter Zak McCarson also brings experience to the team, plus good athleticism, and he’s “got a really good serve,” Vann said.

Senior Lam Be is in his second year on the team and is showing a diverse array of skills, playing all the way around.

Junior Davontrez Wallace is already fairly disciplined as a setter, even with limited experience.

The coach cited junior middle blocker Keoni Broad as a player on the team that could become increasingly important later in the season as he works on his kills and blocking.

Vann sees improvement on the horizon for his squad if it can learn to pass better, particularly when receiving serves.

The Warriors advanced as far as the conference tournament semifinals last year after earning the No. 3 seed. Despite their winless record in 2014, most of the conference schedule remains.