Melton G. Walden Sr. passed Sept. 25, 2014, at Sentara Obici Hospital, Suffolk. He was preceded in death by his parents, Squire T. Walden and Lizzie T. Walden; sister, Goldie W. Wilson; and brother, Walter T. Walden. He was a devoted member of Mt. Sinai Baptist Church where he served faithfully in many capacities. 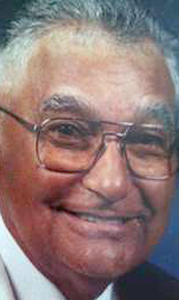 Mr. Walden was a graduate of Nansemond County Training School, Suffolk. He was a farmer for many years and worked as a masonry contractor, animation depot, Portsmouth and Suffolk City School Department of Transportation.

A funeral service will be held at 1 p.m. Monday, Sept. 29, 2014, at Mt. Sinai Baptist Church, 6100 Holy Neck Road, Suffolk. The Rev. William L. Lang will deliver the eulogy. His mortal remains will lie in state at the church at 11 a.m. Interment will be in the church cemetery.

Professional services with dignity have been entrusted to Crocker Funeral Home Inc. Condolences may be extended to the family at www.crockerfuneralhome.com.