James Buchanan Jones, son of John and Anna Jones, has earned the rank of Eagle Scout, the highest achievement in Boy Scouts of America.

Jim, a member of Troop 1 chartered by Main Street United Methodist Church, received his medal at an Eagle Court of Honor on Sept. 7 at Main Street Church. 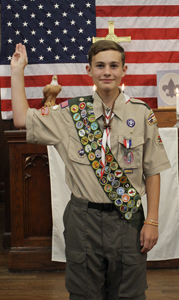 James Buchanan Jones recently earned his Eagle Scout honor. He is a member of Troop 1.

Jim is an active member of Main Street United Methodist Church, where he serves as acolyte, occasional speaker, usher and youth group participant. He is an eighth-grade student at Nansemond-Suffolk Academy.

Jim joined Cub Scout Pack 1 in September 2008 and advanced through the ranks. In February 2012, he earned the Arrow of Light, Cub Scouting’s highest award. He crossed over into Boy Scout Troop 1 and earned the rank of Scout on Feb. 21, 2012.

During the past couple of years, Jim has quickly progressed through the ranks of Scouting. He has served in a number of leadership positions, most notably as an assistant Senior Patrol leader and Troop Guide. To date he has completed 45 merit badges and completed the requirements for his first Eagle Palm.

For his Eagle Scout Leadership Project, Jim planned and coordinated renovations of the “Music Room” behind the altar at Main Street United Methodist Church. Supplies for the project were obtained through donations and material contributions.

Troop 1 Scouts and adult leaders helped with the project.

Jim was on the Headmaster’s List while attending Isle of Wight Academy and last year began attending Nansemond-Suffolk Academy, where he receives High Honors in academics.

He is an active member in the school band, plays on the JJV soccer team, serves as an NSA Ambassador, while remaining involved in church and continuing his piano studies.