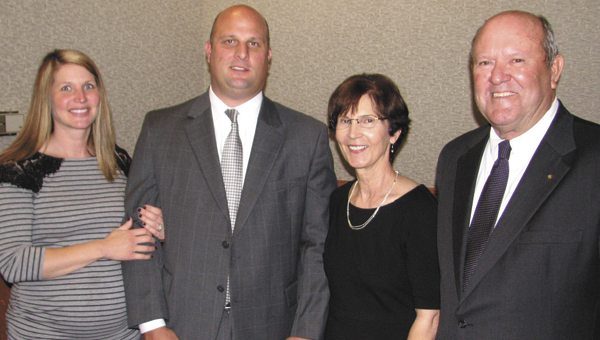 Commissioner of the Revenue Thomas Hazelwood, right, was joined by his family at a reception in his honor on Monday. From right are his wife, Karen Hazelwood, their son, Sidney Hazelwood, and Sidney’s wife, Melissa Hazelwood.

Commissioner of the Revenue Thomas Hazelwood will trade a Market Street office for life on the water when he retires at the close of business on Tuesday.

It’s the opposite of what he did back in 1991, when he asked to be considered for appointment to the vacancy in the office. Shortly thereafter, Virginia’s constitutional officers became elected positions, and the voters approved him seven times — all but the first with no opposition — to return to the office.

“I appreciate the taxpayers electing me seven times,” Hazelwood said.

On Monday, a reception at city hall attracted dozens of current and former city employees, and even his counterparts from other localities, who came to send Hazelwood off in style. The table decorations included oyster shells, a nod to Hazelwood’s once and future occupation.

The commissioner of the revenue’s office assesses all local taxes except for real estate. Personal property is the largest category, Hazelwood said, and others include meals, lodging and business licenses. The taxes his office handles total about $50 million a year, Hazelwood said.

Working with people has been his favorite part of the job, he said.

“Having a staff that always provided good customer service has made my life pretty easy,” he said.

Hazelwood called learning the law his first few years in office the most challenging part of the job, but said it was a “pleasant challenge.”

“I just tried to keep a low profile and get the job done,” he said.

Hazelwood said he’ll return to the waterman’s life on a part-time basis.

“I don’t want to be so important that the boat doesn’t go out without me,” he said.

He’ll also be able to spend more time with his wife, Karen, as well as his son, Sidney, and daughter-in-law, Melissa, and his grandchildren — a 2-year-old grandson and a granddaughter on the way.

In the meantime, the chief deputy commissioner, Susan Draper, will perform Hazelwood’s tasks.

“He left some big shoes to fill,” she said. “He is a good boss. We’re going to miss him, but we’re excited for him.”

She has worked in the Suffolk office for eight years.

A special election to fill the seat permanently has yet to be set.