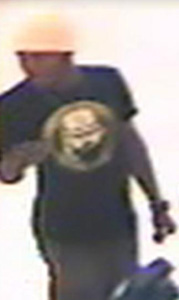 A surveillance camera image of the suspect.

The incident occurred on Aug. 10 about 6:05 p.m., when the man attempted to purchase a gift card at the Farm Fresh on North Main Street using counterfeit $100 bills.

The cashier recognized the bills as being counterfeit and notified management, Klink said. The man fled the store after the cashier approached management.

He is described as a black male in his early 20s wearing a black shirt and yellow ball cap.