A nonprofit with the mission of making Suffolk a healthier city delivered its annual update Tuesday, detailing a range of projects that are helping folks eat better and get more exercise. 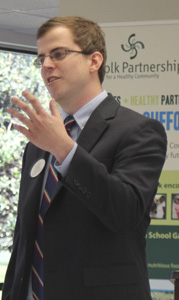 Jett Johnson, program manager with Healthy People Healthy Suffolk — whose founding sponsors are Suffolk Partnership for a Healthy Community and Obici Healthcare Foundation — said the organization has been “moving in the right direction, but we certainly still have a lot to accomplish.”

Nine eateries have signed on for a project encouraging restaurants to label heart-healthy items on menus, Johnson said.

Sandy Spiro of Sandy Spiro Fitness Solutions spoke about a bootcamp project aiming for 20 to 25 participants per 10-week session.

“Some have never exercised before,” Spiro said. “It gives them an opportunity in a non-traditional atmosphere. We have had success with people small and large.”

Sessions begin at 6:30 a.m. Tuesdays at the Visitor Center pavilion. “I think we have changed a lot of people’s lives,” Spiro said. “We are grabbing them off the street as they are walking by.”

Doug Naismith described the success of the Million Steps Challenge, in which sister cities Suffolk, Virginia and Suffolk County, England are presently locked in a heated competition to see which can walk the most collective steps.

“We thought this was a pretty neat thing for Sister Cities to be doing,” but help was needed to coordinate it so Suffolk Sister Cities International and Healthy People teamed up, according to Naismith.

After two weeks, Suffolk, Va., has logged more than 35 million steps, Naismith said. Johnson added that while the city of Suffolk was winning after the first week, the English have pulled ahead.

The healthcare foundation’s Diane Nelms spoke about 15 communities being awarded grants of $500 each for National Night Out celebrations.

They used the money for things like healthy food and energetic activities such as cornhole, bounce houses, hula-hoop contests and sack races. “No one served any soda, and that’s huge,” Nelms said.

Helen Gabriel of Suffolk Parks and Recreation said a half-mile trail that will be built at Lake Kennedy Park would be “something anyone of any economic status can do.”

Karen Brower, a longtime public health worker in Suffolk, together with Gabriel, updated on Healthy People’s two 5K events. The spring event, it was announced, will move from Constant’s Wharf to Bennett’s Creek Park next year.

Finally, Kay Cherry detailed efforts to establish school and community gardens in Suffolk, which she said was also in response to the Great Recession.

“While our mission was to address health issues, our emphasis was the fact people were not going to have enough food to eat,” Cherry said of the project’s 2009 genesis.