Health issues have made it difficult to predict how good Lakeland High School’s boys’ and girls’ cross country teams can be this year, but coach Chris Novakoski is still holding tentative high hopes and some clear expectations. 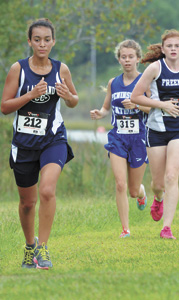 He noted the Cavaliers have had three district meets and one invitational so far, and they have done simply OK.

“We’ve had a lot of problems with injuries and sickness this year,” he said. “We’re holding our own, but we’re not where I thought we would be at this point right now.”

Lakeland’s teams are finishing a place or two lower than last year, usually a little below the middle of the pack.

The boys’ team features 10 runners, six of which are returners, led by senior Jake Crowell.

The coach also expects Crowell to make it to states, but said, “He’s going to have to get down to the low 17s, and we only have a month to do it.”

Ryan Wright is already generating excitement for the Cavaliers as a freshman.

The coach said the sky is the limit with Wright.

In terms of the team’s performance, the coach said he believes it should finish in no less than second place at the Ironclad Conference championships.

“If everything breaks our way, maybe we can beat River,” Novakoski said, referring to Nansemond River High School. “If not, we’re going to be close to them.”

He expects both the girls’ and the boys’ teams to make regionals and said the boys’ team’s prospects of making it to states are tied up in the performances of Wright, Bonds and Ratajczak.

“If they reach their potential and they absolutely peak out, we’ve got a chance,” he said.

The girls’ team features seven runners, five of which are returning, led by senior Juli Durand, who qualified for states last year.

Novakoski said like last year, Durand is the second-best female runner in Suffolk, and her state prospects look good.

“I would expect Juli to go back to states again,” Novakoski said. “I don’t see why not.”

Also starring on Lakeland’s team is junior Jennifer Rockwell, who has battled illness, but was the fastest on the team in the first meet of the year.

“I would expect her to be very close to Juli at the end of the year,” Novakoski said, and added she has an outside chance of making it to states.

As for the team’s conference prospects, Novakoski said, “Last year, the girls finished second and only lost to River by six points. I’m hoping we can hold second. If we don’t get second, I don’t see them finishing lower than third.”