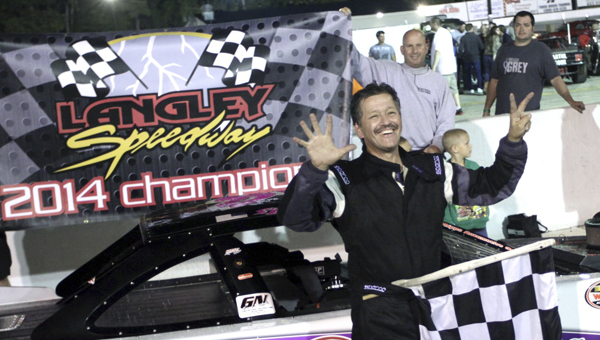 Matt Slye took the lead for good on lap 51 and survived a series of restarts at the end to bag his first win of the season in the 75-lap Modifieds race, the featured event of Saturday’s NASCAR Whelen All-American Series program at Langley Speedway.

Slye started on the pole, at 87.459 mph, and led the first four laps before giving way to Robbie Babb on a restart at Lap 5. With the exception of two circuits, Babb led laps five through 50. Late Model regular Mark Wertz nosed ahead on a restart to pace laps 15 and 16.

On Lap 50, Slye slipped underneath Babb in Turn 2. They went door-to-door for a lap, with Slye pulling out front on Lap 51. Within 10 laps, Slye had driven off by nearly a full straightaway.

The race’s fourth yellow flag waved on Lap 73. It was quickly followed by another pair, as two attempts at a restart went awry.

Back under way for a three-lap dash to the checkers, Wertz inched ahead of Slye on the backstretch. Returning to the flagstand, though, Slye surged out front.

At the finish, Slye was the winner by four lengths over Wertz. Joe Scarbrough was third, while Rick Gdovic and Donnie Holston rounded out the top five.