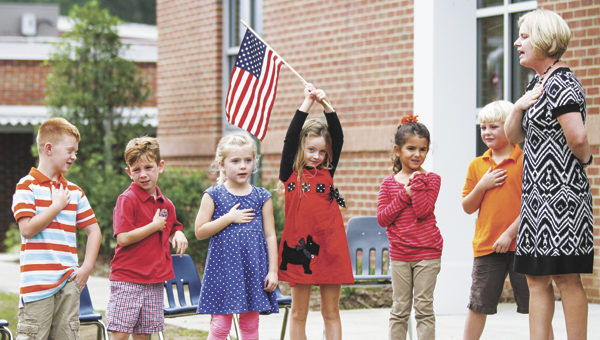 The earlier children get started on the path toward education, the more likely they will be successful later on.

With that in mind, Isle of Wight Academy got started more than a year ago on raising approximately $1 million dollars for an Early Learning Center that culminated on Thursday when the building was dedicated.

The six-classroom building was in action on Thursday as donors — including a representative of Smithfield Foods, which had donated $800,000 toward the project — were on hand for the ceremony.

“It was wonderful to have these people come here today, and to let them get a look at these young people, as that is the reason for their contribution,” said Headmaster Benjamin Vaughan. “It is a beautiful building and the young people are thoroughly enjoying it. We appreciate all of the contributions that have been made toward it, making it possible, in particular the contribution from Smithfield Foods.”

“I wish I had this facility when I was 7 or 8 years old,” he said with a laugh. “We are pleased with the impact that this will have on the lives of the students here. We are committed to support the caring and nurturing atmosphere of the family-oriented Isle of Wight Academy.”

But Smithfield wasn’t the only donor on hand, as there were many, including Charles Rose, who lives near Chuckatuck. Rose has supported private education his whole adult life, as his son went to Nansemond-Suffolk Academy and his grandchildren attend IWA.

“This is a wonderful facility. They didn’t even offer kindergarten in public schools when I was growing up,” he added with a laugh. “But this is quite an accomplishment here. I am proud of it and very proud to have been a helper.”

When Mary-Margaret Wells took the job as director of development at IWA, she knew she was going to have to figure out a way to come up with that money for the three-pronged ‘Building for Future’ campaign.

The first prong being the learning center, it will be followed up by renovations to the school’s gymnasium and finally landscaping to better bring the campus together.

“It is extremely important,” Wells said of the Early Learning Center. “Before, the children were in mobile units. Now, they have a permanent home, and we have more space.”

Wells said this building is the culmination of a lot of dreams.

“It completes the original layout design of the school by the first board,” she said. “If you look at the campus from above, the school actually makes an H-shape.”

Wells said she was appreciative to everyone who donated and also that C.W. Brinkley Construction of Suffolk did a good job.

“Our support has been fantastic,” she said. “We couldn’t have done this without it.”