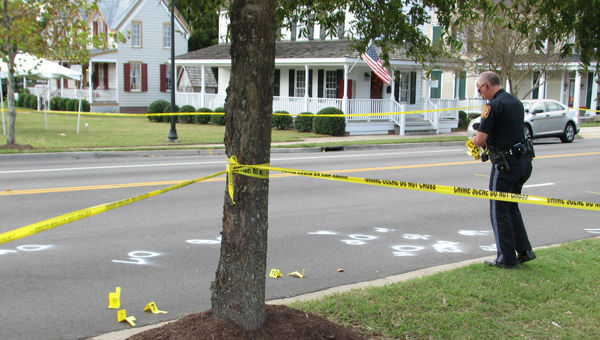 A Suffolk police officer picks up evidence tents from North Main Street following the investigation of an accident involving another police officer.

UPDATED: Detective Solodyankin has been released from the hospital and is recovering at home, according to a city spokeswoman.

Earlier: A Suffolk police officer directing traffic in downtown was struck and injured by a motorist Saturday afternoon.

The crash happened at the intersection of North Main and Prentis streets, where the Suffolk Nansemond Historical Society’s “Touch a Truck” fundraiser was going on.

The accident happened at 12:03 p.m., when a four-door Infiniti struck the officer, according to a city news release.

The officer, Detective Sergey Solodyankin, 28, was ground transported to Sentara Obici Hospital, where he was airlifted to Sentara Norfolk General Hospital for treatment of his injuries. Saturday evening, he remained hospitalized in fair condition, Klink said.

Police interviewed some volunteers at the event. One said she heard the crash and turned around to see the officer rolling off the vehicle.

The intersection was closed until past 3 p.m. as officers investigated the accident. Charges are pending, Klink said.

Event organizers said one or two children might have seen the accident, but volunteers tried to keep kids’ attention directed at the construction, farming and law enforcement equipment that was on site for the event, rather than toward the road.

An organizer estimated the receipts at the gate would be about half what they were last year because the road was closed during the investigation, and also because of the early dispersal of Peanut Fest parade spectators following a bomb threat.