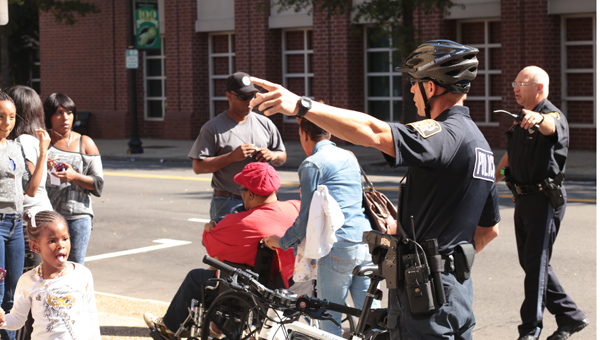 Officers direct Peanut Fest parade spectators away from the Godwin Courts Building, seen in the background, following two bomb threats that were called in during the parade.

Law enforcement ushered parade spectators away from the 100 block of North Main Street. People generally cooperated, according to News-Herald Editor Res Spears, who was at the scene.

Buildings across the street were not evacuated, but people were told to stay inside.

City spokeswoman Diana Klink said in a press release that two bomb threats were called in to Emergency Communications. The parade, which had started at 10 a.m., was stopped at 10:49 a.m., and the last few units were diverted to a different route.

Klink said a suspicious package was located in the courtyard area of the Godwin Courts Building. The package was found to contain laundry and laundry detergent.

“The items located were incidental to the search and were determined to be unrelated to the bomb threat,” Klink wrote in an email. No outside agencies responded, and the fire marshal’s office was investigating, she said.

The bomb threat came through just as the Nansemond-Suffolk Academy marching band was getting ready to turn onto Main Street. Folks gathered at Main Street United Methodist Church were disappointed, as many of them have kids at NSA.

But the band went around the block the other way, came up Market Street, and continued along the rest of the route.

The courthouse has been the target of several bomb threats recently, including on Aug. 28, Sept. 11 and Sept. 24 — two Thursdays and a Wednesday, respectively.

Anyone who has information on any of the threats is asked to call Crime Line at 1-888-LOCK-U-UP or text the keyword SPDVATIP and the tip to 274637 (CRIMES). Tipsters never have to give their names or appear in court, and may be eligible for a reward of up to $1,000.