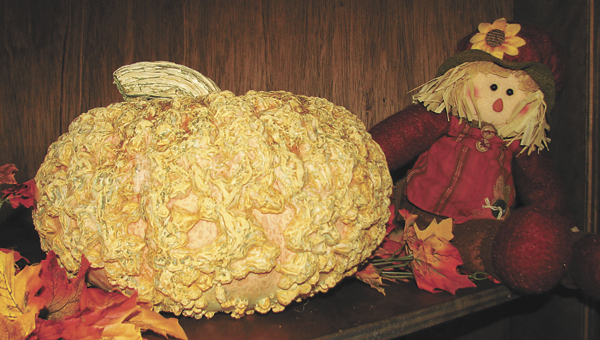 : One of the peanut pumpkins at the Peanut Kids Company Store decorates a shelf, along with a scarecrow. The pumpkin can be seen at the company’s Peanut Fest booth this weekend.

Here’s a good lesson for the kids, often taught in a non-food context: You can’t judge a pumpkin by its cover.

Among the decorations currently in the Peanut Kids Company Store and able to be seen at its booth at Peanut Fest this weekend is a peanut pumpkin.

The pumpkin has nothing at all to do with peanuts, except for the growths on its pink skin that resemble the size, shape, color and texture of peanuts.

According to almanac.com, the “peanuts” on the pumpkin are created by excess sugars in the flesh that leak out and dry.

Thanks to the high sugar content, these pumpkins are said to be excellent in pies and other baked goods, according to ehow.com.

The variety is thought to be a cross between a Hubbard squash and some unknown pumpkin variety, according to ehow.com. It originated in the 19th century in France. Large ones can weigh 10 to 12 pounds at maturity. Older fruit tends to have more warts and be sweeter.