A personal fight and a tangle with the Tigers

Showdowns between the Lakeland High School Cavaliers and the King’s Fork High School Bulldogs always have a special quality to them that other cross-city rivalries lack. 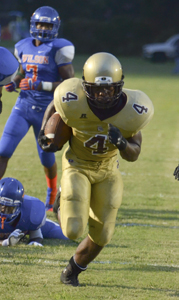 King’s Fork High School junior feature back Deshaun Wethington will be a featured part of the Bulldogs’ efforts to get a win against visiting Lakeland High School in tonight’s cross-city showdown. (Danny Haymond photo)

“A lot of these guys were teammates in middle school,” King’s Fork coach Joe Jones said.

“He’s a quality young man, and a quality running back,” Jones said, noting the Bulldogs will need to put pressure on him tonight.

Lakeland coach Bryan Potts, a longtime defensive coordinator for Jones at King’s Fork, said it is the familiarity the two teams have with each other that leads to players putting a special emphasis on this game.

“Hopefully that translates into a better effort for us this week and hopefully a victory,” Potts said.

Both the Cavaliers and Bulldogs are coming off of lopsided losses, adding to their hunger for a win tonight.

Potts referred to KF junior feature back Deshaun Wethington when he said, “We know we’ve got to stop No. 4. Their team goes as No. 4 goes.”

Wethington tweaked his knee last week against host Indian River High School, but it was a minor injury.

“He’s going to be at full speed,” Jones said.

After noting Stokley, Jones said the Cavaliers have “good experience at quarterback with Miles Goodman,” highlighting the senior’s athleticism.

Potts said Lakeland will try to be balanced on offense and be aware of the particularly strong members in King’s Fork’s secondary — seniors TyQuan Weston and Kane Miskel.

The Bulldogs will be without junior tight end/linebacker John Spearman due to a shoulder injury.

Last season, when he was coaching at Forest Park High School, his team — which ended up 9-4 — faced the Tigers in the 6A South Region semifinals and fell 40-7.

“They’re good at every position,” Coccoli said. “They’re solid at all three phases. They’re extremely well-coached, probably one of the better coached teams in the state.”

And he noted he is not the only one aware of the Tigers’ bite.

“The kids know the challenge ahead,” Coccoli said. “It’s an opportunity to see where we’re at.”

Highlighting key OS players to account for, he mentioned senior running back Deshawn McClease, who has committed to Virginia Tech, and sophomore quarterback Shon Mitchell.

Nansemond-Suffolk Academy has been ravaged by injuries, and it has experienced both good news and bad news on that front during its time off.

Senior offensive/defensive lineman Shay Wood will play on Saturday after discovering that his wrist is not fractured.

“We need his bulk up front,” coach Lew Johnston said, noting Wood mostly plays on offense but may be called to play defense against Norfolk Academy’s potent attack.

NSA senior running back Addison Peak and junior running back Noah Giles are both cleared and back to full health, but senior offensive guard/defensive end Camden Sutton injured his knee and will be out for two to three weeks.

This will force Johnston to find new starters on both sides of the ball as the Saints face an archrival.

“There’s no love lost between NSA and NA, believe me,” he said. “They’re a good football team. Coach (Steve) Monninger does a good job. They’re well-coached.”

Moving junior linebacker Cole Christiansen back inside and senior David Gough back to the defensive line, Johnston hopes to limit the Bulldogs’ offense, which is led by senior dual threat quarterback Allan Parrott.