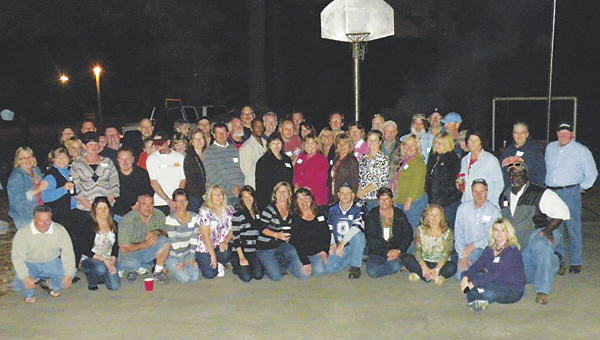 Alumni gather for a photo during a previous Forest Glen High School reunion. The 2014 event will be held Oct. 25.

The close-knit Forest Glen High School alumni network is gearing up for its latest reunion.

Following a tradition of rotating responsibility for the event, the class of 1984 will host it this year.

It’s open to all students, faculty and staff from the school’s 1965 opening through the final graduating class in 1990.

Helping organize this year’s event is Jackie Taylor. She’s from the class of 1981, but her cousin, a 1984 graduate, asked her to “step up, because I had helped at the last few reunions,” she said.

“Each year we have opened it up to more and more people, because more people have become interested,” she said.

Camping will be available that night, and Roy and Ricky’s Catering will provide food. DJ Sal and the Wild Heart Band will provide the music.

“There was a lot of school spirit,” Taylor said. “I know we had an awesome basketball team — they won state one year.”

It was an era when the four high schools — Forest Glen, John Yeates, John F. Kennedy and Suffolk High — were always rivals on the basketball court and football field. “Not as much with the tennis and other sports,” Taylor added.

Alumni have stuck together, she said. “We always call it Ranger Nation. We are a very close-knit group of friends.”

On Friday, Taylor reported more than 200 registrations across 25 different classes. Four or five are coming from California, she said, and others from New Jersey and South Carolina.

The reunion will include “a little memorial get-together to remember friends who have passed away,” Taylor said.

Businesses of alumni sponsor the reunion, she said, including providing prizes for giveaways and drawings.

“It’s just a good time to get together,” Taylor said. “We talk about old times and things we would do. We try to stay connected with all our classmates.”

Information on the reunion can be found at www.fghs2014reunion.net.