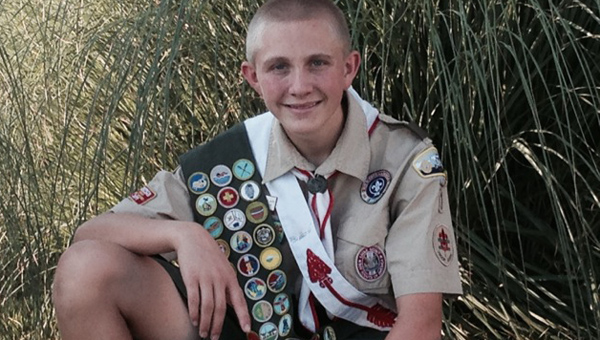 Matthew William Chamberlain, son of Jeff and Brenda Chamberlain, has earned the rank of Eagle Scout, the highest achievement in Boy Scouts of America.

Matt, a member of Troop 1 chartered by Main Street United Methodist Church, received his medal at an Eagle Court of Honor on Sept. 27 at Murphy’s Mill Cabin.

Matt was invited to a Cub Scout meeting with Pack 30 by a friend in the fall of 2010. He advanced through the ranks and was awarded the highest award in Cub Scouts, the Arrow of Light, in January 2012. When Matt he over to Boy Scouts on March 3, 2012, he transferred to Troop 1.

This past spring, Matt worked diligently on his Eagle Project, which was to build four picnic tables for the Suffolk Fire and Rescue Departments.

Matt’s love of Scouting is shown by his commitment of regularly attending meetings and camping trips and attaining merit badges. To date, he has successfully completed 35 merit badges and is enthusiastically working on four more.  Matt plans to remain active in Scouting and is looking forward to attending both Sea Base and Philmont next summer.

In addition to Scouting, Matt enjoys playing the trumpet for the Kings Fork Mighty Marching Bulldogs, soccer and football.