NRHS comes back to beat Kecoughtan 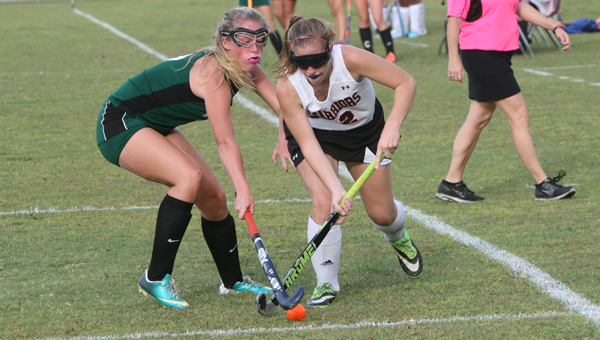 The Nansemond River High School field hockey team’s performance through much of Monday’s game was not at the level it needed to be at this point in the season, but the host Lady Warriors used the last 10 minutes of the game to start correcting that.

The visiting Kecoughtan High School Lady Warriors led 1-0 for part of the first half and then 2-1 for nearly half of the final 30 minutes of play. But Nansemond River junior Jaclyn Mounie scored two goals late to help give her team a 3-2 win.

“The last half of the second half I thought we did a good job of picking it up,” NR coach Ali Mowry said, after noting it was mistakes and disregard for things like proper footwork that put her team behind.

She said her players eventually started getting back in front of the ball and playing sound defense again.

“I think we did a good job of meeting the ball,” she said. Prior to that, “We were letting them kind of step in front of us.”

Mowry said she does not have to say much after games at this point in the year because she can see on the faces of her players the understanding that things need to be done better.

“We were playing down to their level,” senior Desiree Patterson said. But in the second half, “We got our passes together.”

Senior Juliana Stewart kept Nansemond River in the game during the first half with a goal assisted by junior Claire Janek that tied the game, 1-1. The ball went up and over the Kecoughtan goalkeeper’s head on its way in.

Mounie’s playing time was limited early in the game, but she made it count late in the second half.

“I just went out there, and I just played the game,” she said. “My team had a lot of good passing in the second half, which really helped.”

Trailing 2-1 with just under 10 minutes to go, Nansemond River was applying intense pressure in the visiting Lady Warriors’ circle. NR had the ball right in front of the Kecoughtan goal with multiple players trying to put it in, but it was driven out.

Seconds later, senior Logan Crews fired the ball back in where Patterson was standing, along with Mounie.

“I knew Jaclyn was there, so I just tipped it, and she got it,” Patterson said.

Seeing the ball, Mounie said, “It went up, and I just hit it in,” tying the game with 7:05 remaining.

Rather than let up, the host Lady Warriors kept the pressure on, and sophomore Mackenzie Roach later executed a shot that Mounie knocked in with 4:58 to go.

“I knew we would come back,” Mounie said.

“Jac’s intensity is always upper level,” Mowry said, praising her athleticism as well as her mindset.