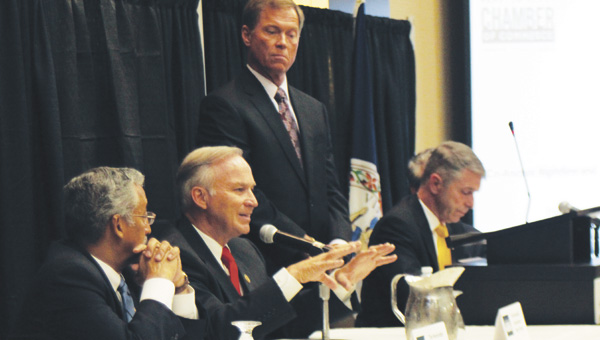 With Rep. Bobby Scott on his right, as well as Hampton Roads Chamber of Commerce President and CEO Bryan Stephens and congressmen Rob Wittman and Scott Rigell, Suffolk’s voice in the U.S. House of Representatives, Randy Forbes, hammers the issues of growing the economy and maintaining military dominance, during a congressional forum in Virginia Beach on Wednesday.

During a congressional forum Wednesday ranging across several issues, Suffolk’s voice in the U.S. House of Representatives, Randy Forbes, focused on the need to grow the economy and maintain military dominance.

Before taking questions, each congressman was given five minutes to speak on the issues facing Hampton Roads, in order of seniority in office.

“It’s nice to be first, because you need three Republicans to rebut everything I’m going to say,” Scott quipped.

Speaking second, Forbes began focusing attention on how many voters believe America is on the wrong track.

“If I could magically pull America into this room today … and asked for those of you who fundamentally feel the country is heading in the right direction to sit on this side of the room,” and for those with the opposing view to sit on the other side, “those sitting on this side of the room” — the wrong-direction side — “would have two-thirds, by every poll and every analysis in the country,” Forbes said.

Forbes laid out why he thinks this is the case, starting with the economy.

“You can talk about all the programs you want, but if you can’t get this economy lit up and doing well, we can’t fund any of those programs, because government can’t fund it themselves.”

Next came defense. Forbes shared his thoughts on what military chiefs think about the nation’s ability to defend its interests amid the current climate of shrinking spending.

For instance, the chief of the Army, according to Forbes, would say there is no longer any guarantee America can win one conflict, when formerly the nation’s military could fight and win two conflicts simultaneously.

He criticized President Barack Obama’s argument that we are now fighting in a different way, “doing everything with air strikes and air capability.”

The Air Force chief, according to Forbes, would cite a dramatic reduction in planes, disrepair among the planes in service, and a 30-percent reduction in training hours for pilots in the past couple of years.

The Navy chief’s main concern, in Forbes’ view, would be the unwelcome prospect of the fleet whittled away to 250 ships, rendering America a regional power rather than the world’s superpower.

With 274 ships next year, Forbes said, that point is getting close.

Forbes said the lack of American leadership is “just glaring.” He offered an anecdote about a meeting he had with Singapore’s prime minister, who told him Pacific nations “never really liked” America, “but we feel you know how to make the trains run on time.”

“Now we don’t feel you know how to make the trains run on time,” Forbes said the prime minister told him. “Then they start signing treaties with the bad guys.”

Americans have the power to steer their country back in the right direction, Forbes said.