Lunch is on us 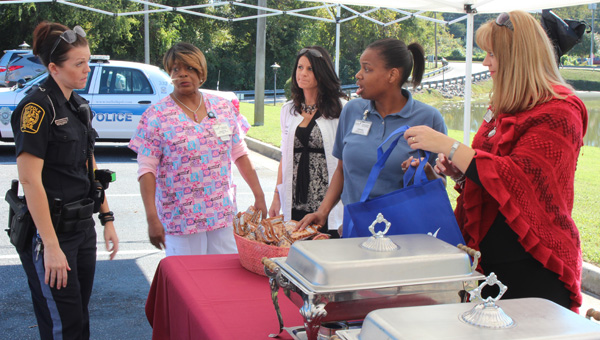 At a local rehabilitation center shortly before noon Friday, Suffolk police officer Danielle Anderson idled her patrol car past a row of tables outside the front entrance lined with hot food.

She parked and strolled over. She may have been drawn by the delicious, mostly savory scents — barbecue, grilled chicken, cheeseburgers, Italian sausage, baked beans, coleslaw, potato salad, cookies.

“Tell me if this is doable, because somehow I have been designated to come here by my entire squad,” Anderson said.

It was the second first-responders “thank you” lunch at Kindred Transitional Care and Rehabilitation.

The event was first held in 2012, said Mel Epelle, executive director at what it also known as Nansemond Pointe.

“Last year got cancelled,” he said.

“When I think about first-responders, what comes to mind is first-defenders,” Epelle said. “They play a vital role in our nation in terms of emergency situations, such as the one facing us today — the Ebola virus. This is to say thank you to them for all they do, their commitment.”

Jane Warrren, admissions director, said Nansemond Pointe is a frequent beneficiary of that commitment. “There is not a day goes by that there is not a medical response or medical transport that goes in and out the doors,” Warren said.

Pretty soon, Anderson wasn’t the only first-responder placing an order. A fire engine negotiated the narrow driveway, and several more first-responders climbed out.

Anderson clarified that she “kind of volunteered to pick some up and go deliver it to everyone else.”

“So I’m going to be busy doing that,” she said. “I’m going to have to drive around — I have people all the way out to Whaleyville. But it’s OK; it’s kind of easier, I figured, to try to coordinate than for everyone to come drive here.”

Capt. John Rizzatti, spokesman for the hungry firefighters who had just shown up, said the gesture was appreciated.

“We greatly appreciate what they are doing for us — this is amazing,” he said. “They’ve got one heck of a spread.”

He also said it was unnecessary. “We are doing our jobs,” he said.

City spokeswoman Diana Klink said Fire Chief Cedric Scott dropped by for his lunch early in the afternoon. “He said the food was absolutely fantastic, and he certainly appreciated their efforts,” she said.