Sheros — or female heroes — aren’t just characters in movies and books, and 150 Girl Scouts had the opportunity to meet local sheros during a special event about emergency operations and medicine event held on Oct. 11 at Sentara Norfolk General Hospital. During the day, girls from grades K-12 had the chance to learn about healthy living and well-being as they stepped into the roles of nurses, first responders and other professionals. 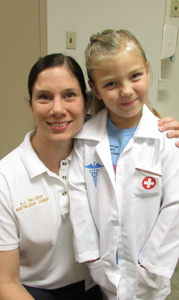 Sheros: Suffolk resident and Girl Scout Daisy Haley McLeod-Dutcher learned about emergency preparedness and medicine during a Girl Scout event on Oct. 11 at Sentara Norfolk General Hospital. Daisy is pictured with Battalion Chief Amy Valdez from the Virginia Beach Fire Department who led a workshop about first aid during the event.

The event began with a session led by Norfolk Firefighter Tina Jones, who talked to the girls about the importance of staying calm during an emergency and what it’s like to be a firefighter. She also shared that she enjoys her job because she gets to help people every day.

“Firefighters are here to help,” Jones said. “In fact, a lot of what we do as firefighters goes along with the Girl Scout Promise and Law — we do our best to make a difference.”

Girls then attended workshops where they made first aid kits and tried on turnout gear with Chief Battalion Amy Valdez and Kathleen Pearson from the Virginia Beach Fire Department and learned about preparing for an emergency by decorating pillowcases that they could quickly fill with important items in case they ever need to leave their house in a rush due to an emergency.

The girls also learned about organ donation from Cindy Harris, who lost her son Paul in 2006 following a car accident. She shared her story and talked about why she volunteers with LifeNet today to help families facing the decision about donating the organs of their loved ones.

During the afternoon, girls heard from nurses and learned about pediatrics.